In 2003, we were asked by SKOR (a Dutch institute for art in public spaces), and curator Rob van de Ven, to participate in 'Gnome Sweet Gnome', a group exhibition that was to take place at De Keukenhof, a large flower park situated in the Dutch city of Lisse. The theme of the exhibition revolved around 'gnomes', and contributing artists included Wim T. Schippers and Sigurdur Gudmundsson.

At first, we were a little uncertain about the theme, 'gnomes'. It seemed like such an open invitation to bad taste, irony and kitsch; all matters we usually try to oppose in our work. So our idea was to take the given theme, and turn it into something non-ironic and unfunny; something aesthetically consistent, and conceptually tight.

Our starting point was the flagpole. Since De Keukenhof attracts a lot of international tourists, dozens of flagpoles are scattered throughout the park, displaying flags of all countries of the world. The idea of our installation was to hijack these poles, and use them to display a new flag; the flag of an imaginary nation. Shown below is a photo montage of what we had in mind; a sketch that we used to present our idea to the curator. 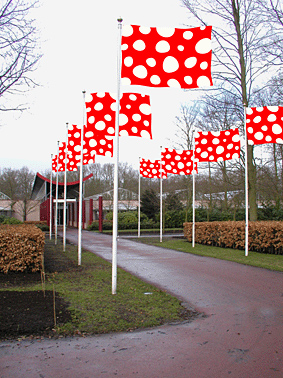 We wanted to come up with an iconic flag, a design that would be flat and formal. At the same time, we wanted the flag to refer to the given theme, 'gnomes'. After thinking about it for a while, we came up with the idea of creating a flag based on an old Dutch children's rhyme called 'Kabouter Spillebeen', a folk song that features a gnome sitting on top of a toadstool (mushroom). The first line of this song describes the toadstool as being "red with white dots"; we decided to turn this phrase into a pattern.

A few dozens of these flags (150 x 225 cm each) were screenprinted, and for the duration of the exhibition (two months) displayed on all the flagpoles in the park. Shown below some details of the installation: 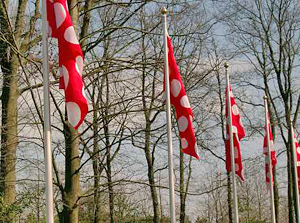 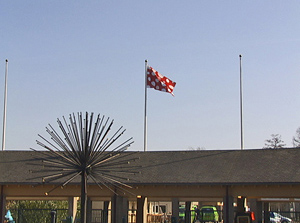 For our installation, we also designed a two-sided A2-sized poster. Featuring the pattern on both sides, and printed on semi-transparent paper, the effect of the poster (when holding it in the light) is almost that of a lava lamp. Shown below the front and back of the poster.

Folded to a 10.5 x 20 cm format, the poster could be used as an invitation for the exhibition as a whole. Shown here the front and back of this folded invitation.

Next to the installation, and the poster/invitation, we were also responsible for the sign system of the exhibition as a whole (not shown here yet; we will try to upload photographs of the sign system soon).
Additionally, we were also asked to design a t-shirt to be sold during the exhibition. Shown below is the t-shirt, featuring the White Dots pattern, screenprinted white on a red shirt: 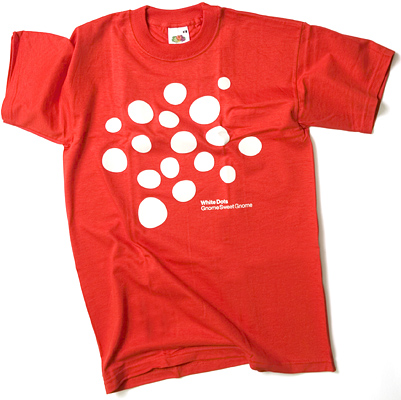 Thanks to Rob van de Ven for inviting us.