War is Over! reproduction
Invitation and animation for Lost & Found

Lost & Found is a small Amsterdam film event, taking place every other month. The intention of this event is to show material that has been 'lost and found': Raw footage, clips of home-made movies found at garage sales, strange videos, ready-made cinema, etc.
Every time a Lost & Found event takes place, a different designer is asked to create the invitation, and added to that, also asked to make a small movie. This small film is then showed (as a loop) in the breaks between the feature movies.

In March 2003, we were asked to design such an invitation and movie. Around that time, the air was thick with war. The United States just attacked Iraq, an event that occupied everyone of us. (In fact, that particular edition of Lost & Found would be partly devoted to movies about war).
Thinking about war, we remembered one of the most striking anti-war posters ever created: John Lennon's and Yoko Ono's 'War is Over!' poster (1970). We decided to base our invitation entirely on that poster.

Shown below the invitation (front and back). It's basically an A5-sized postcard, with a perforation in the middle. This perforation divides the card in two A6-sized postcards.
On the right, we recreated the original 'War is Over!' design. (We thought that the act of recreation would fit well with the 'lost footage' and 'ready-made' theme of the Lost & Found series as a whole. Of course, on the back of the card, we made it totally clear that the original poster is by John Lennon and Yoko Ono, and designed in 1970).
On the left, we put the words 'Lost and Found!', in such a way that it referred to the poster on the right. 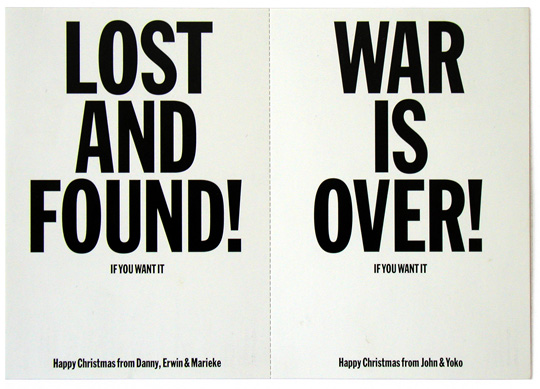 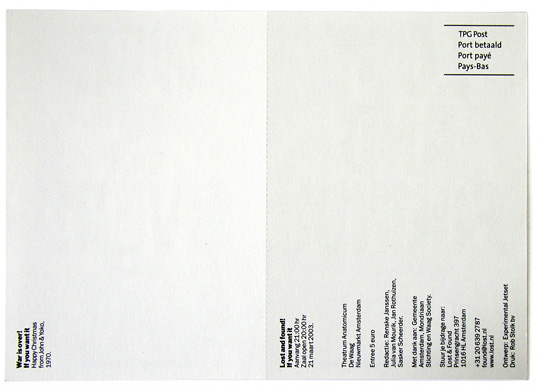 All the information (date and location of the event, etc.) was placed on the back of the left-hand card; the back of the right-hand card was left blank (except for the reference to John Lennon and Yoko Ono).
In other words, while the 'Lost and Found!' card functioned as the actual invitation, the 'War is Over!' card could be used again (as an actual postcard, for example).

As we already wrote, the designer of the invitation was also asked to design a small movie, to be showed in the short breaks between the feature movies.
We came up with a simple typographic loop. Basically a wordplay on the design of the invitation, the movie shows all possible combinations of the phrases 'War is Over!' and 'Lost and Found!'.