For quite some time now, artist Vanessa Beecroft has been working on 'VBSS', a documentary on South Sudan, a subject Vanessa is fully involved in. Although the documentary is not finished yet (at least not on the moment we write this), Vanessa has already organized some preview screenings in different art galleries.
We were asked to design a poster announcing these screenings. At the same time, copies of this poster were sold during the film screenings, signed by VB; the proceedings of these posters were donated to Sudan-related charity. 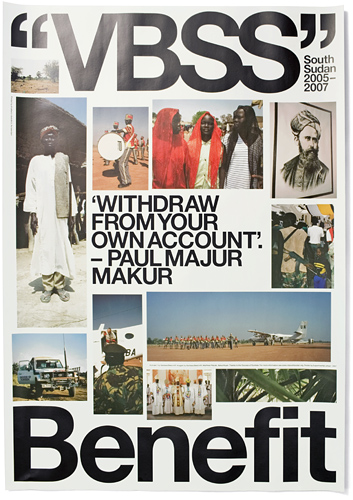 Our plan was to create a poster using only stills from the movie. A large sheet of paper (size A0) crammed with shots from the movie, referring to the idea of a story-board, of a photographic movie-script. We added the word 'Benefit' and the title VBSS, and decided to place VBSS between double quotation marks, to really turn it into the title of a feature film, almost like a logo. The poster is shown above.

Right before the poster went to the printer, Vanessa asked us to add a slogan, a quote by Paul Majur Makur: "Withdrawal from your own account". We agreed, but in retrospect we shouldn't have added this quote. In this particular case, the poster should have either been completely pictorial, or completely typographic; as it is now, it is too much an 'in-between' construction. But yeah, what can we say? Last-moment decisions are always hit-or-miss.

Shown below an image of some posters as they were hanging in a street in Milan (photo by Monica Eulitz): 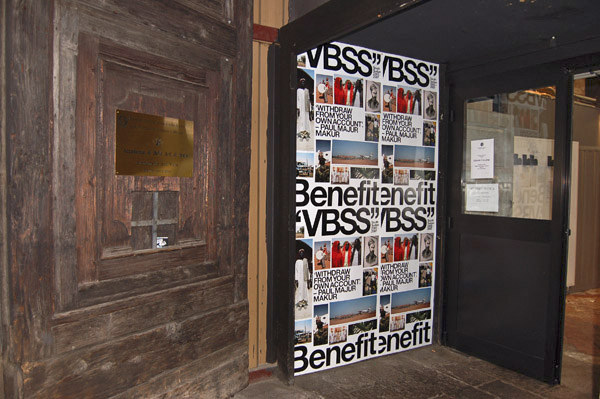 Based on this poster, we also designed an A5-sized invitation for one of the screenings, an event that took place on March 30, 2007, at Galleria Lia Rumma in Milan (invitation not shown here).

A couple of months later, Vanessa also asked us to design the titles that would appear in the documentary itself (the subtitles, the captions; in short, all typography in the movie) and we did actually make some sketches for that, but we never finished them. Around that time, we were working quite hard on a French assignment (see 104 / Le Cent Quatre), feeling completely burnt-out, being unable to finish the movie titles. So we introduced Vanessa to our friend Mark Owens (of Life of the Mind), who ended up designing the titles for VB.

Other projects we did for Vanessa Beecroft include VB60, VB61, VB62 and VBDP. For more general information about our cooperation with VB, see VBRS.

prev: Beauty is in The Street