While we were working quite hard on the printed matter and sign system for The Edible City, an exhibition that took place in 2007 at the NAi Maastricht (see NAiM / The Edible City), we were also asked to design some small items loosely connected to this exhibition.

One of these things was a logo for 'Food for Thought', the title of the design manifestation which The Edible City was part of. In short, 'Food for Thought' was an event during which different cultural institutes, from different cities, were presenting exhibitions on the theme of design and food. In fact, The Edible City was one of four exhibitions that took place under the banner 'Food for Thought'. We were asked to design a logo for this manifestation, a logo that all involved institutes could use on their own printed matter.
We weren't exactly jumping with joy when they asked us to come up with a logo for this event. First of all, the whole thing was very last-moment, while we were in fact working really hard on The Edible City, which already took up most of our time.
Secondly, we weren't really fond of the idea of designing a logo only to be used as a partner-logo on other people's printed matter. We've always disliked all these sponsor- and partner-logos that we have to put on our own posters; we really didn't want to design such a logo ourselves, and then force other designers to use it on their posters.
In our opinion, this whole phenomenon, of posters being used mainly as parking spaces for sponsor- and partner-logos, is really an illness of our time. (Why not just mention the partners and sponsors in the body text? Much more readable, much more logical, and most importantly, less damaging to the poster).
But there was no time to turn this into a whole ideological discussion, and we wanted to help out Guus Beumer, the director of NAiM, so we just accepted the assignment, and came up with the following solution, a set of seven 'snippets':

Why snippets? Well, first of all, the posters we ourselves were working on for The Edible City featured different collages built from food wrappers (see NAiM / The Edible City); we figured that a snippet could be used on these posters in a very natural way.
But we also hoped that the snippet would be easy to use on the posters and brochures put out by the other institutes. After all, a snippet, a piece of torn paper, behaves quite naturally in the context of printed matter. That's also why we turned the logo into a set of several snippets: each designer could use the snippet most suitable for his/her poster.

Anyway, after we designed these snippets, we weren't let off the hook. We also were asked to design a logo and poster for Bipolis, the institute organizing 'Food for Thought'.
Again, this was all very last-moment, while we were in fact working very hard on The Edible City; so we kept it quite simple. The name Bipolis, literally 'two-city', refers to the idea of two or more cities working together. So we took the word 'Bipolis', and repeated it, to create a 'doubled' image. Shown here the logo, as used on the A2 poster we designed for Bipolis: 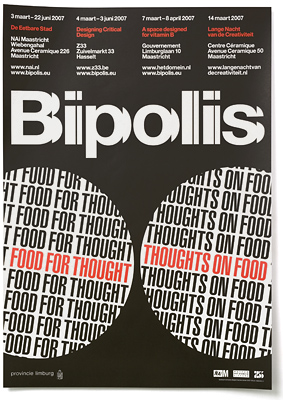 For the main image of the poster, we used two circles, filled with the 'Food for Thought' logo pattern. These two circles referred to the concept of two connected cities (and to a lesser extent also to the idea of two plates as seen from above, or two round tables covered with plaid tablecloth).

next: NAiM The Edible City 1