While the Stedelijk Museum was residing in its new, temporary location, the old building was still standing. We were asked to design some window lettering, announcing the new location. 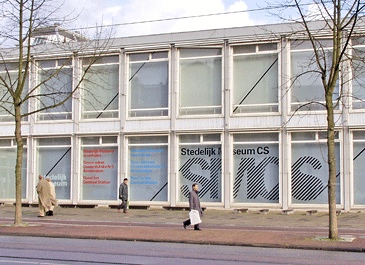 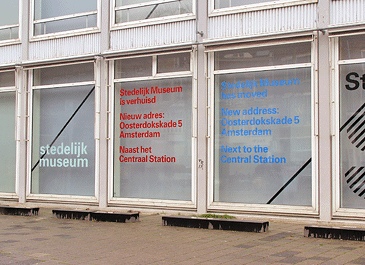 Shown above is the so-called 'Sandberg wing', part of the old building of the Stedelijk Museum, waiting to be demolished. For this wing we designed a simple typographic facade, just to direct visitors to the new location. We also added a few black diagonal lines, to keep the surface together.

(The above photos picture the windows that are facing the Van Baerlestraat. We also did the lettering on the windows facing the Paulus Potterstraat; those photos we lost).

A few more notes: the white lettering that says 'stedelijk museum' (in undercast) is actually the original lettering of the Sandberg wing. And the Sandberg wing was in fact the location in which, a few years earlier, Display took place, a group exhibition we designed in 2002.