In 2007, we were invited by curator Yann Chateigné to partipate in 'Ultramoderne', a group exhibition that would take place between September 20 and November 4, 2007, at Espace Paul Wurth (Luxembourg) Co-curators were Tiphanie Blanc and Alex Reding.

Yann was particularly interested in the links that he saw in our work between rock culture and modernism. Thinking about this, we decided to revisit Kelly 1:1, a project we did in 2002 for Utrecht exhibition space Casco (see Kelly 1:1).
Kelly 1:1 was a replica of a classic Ellsworth Kelly painting, a graphic reproduction consisting of 150 A4-sized sheets of coloured paper. Back then, we subtitled it 'A cover version by Experimental Jetset', because we really saw it as a cover version in the musical sense of the word: we covered the painting in the same way a band would cover another band's song.

For 'Ultramoderne', is was our idea to recreate the original Kelly 1:1 piece, but in a slightly different way. Looking at the dimensions of the original Ellsworth Kelly painting ('Blue, Green, Yellow, Orange, Red', 1966), we noticed that the measurements (60 x 240 inches) could be divided in units of 12'' really easy. And when we say units of 12'', we actually mean record sleeves.
In other words, we realized that the original Ellsworth Kelly painting could be divided in 100 monochrome record sleeves: 20 blue sleeves, 20 green sleeves, 20 yellow sleeves, 20 orange sleeves and 20 red sleeves.

Our first plan was to mount these 100 sleeves flat on the wall, faithfully recreating the Ellsworth Kelly painting, but also referring to the specific manner in which the walls in record stores are sometimes completely lined with record sleeves. However, because of a lack of space, this way of displaying was impossible. But we did find another way to exhibit the sleeves, a way we liked even better: 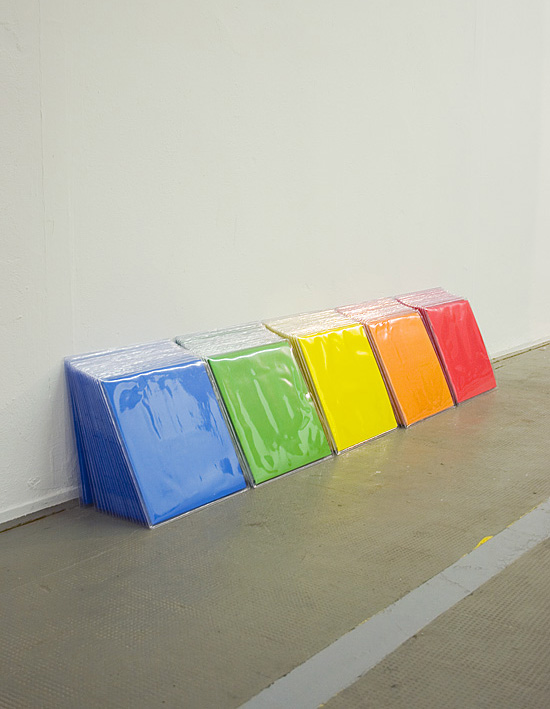 The title of the installation, 'Kelly 33.3', obviously refers to records, 33.3 rpm being the standard rotation speed for LP albums. (But the title might also have been Kelly 12''; that would have worked as well).

The sleeves were actually offset-printed, specifically for this installation. All spines featured a line of text (basically just the title of the project, and the date):

On the occasion of the show, there was also a catalog printed, designed by Jean-Marie Courant (of Regular), and published by It Editions (ISBN 978-2-917053-03-4). This catalog functioned as a 'reader', a collection of previously published texts. Yann invited all the participating artists to suggest a certain text, and asked the artists to write a short introduction with it.

As text for this reader, we suggested the lyrics of 'Surfin' Bird', written by The Trashmen in 1964, as published in the excellent 'The Aesthetics of Rock' (Richard Meltzer,1970). Just like the Kelly 33.3 installation, choosing this text was an attempt to emphasize the links between rock culture and modernism. Shown below the actual pages from 'The Aesthetics of Rock': 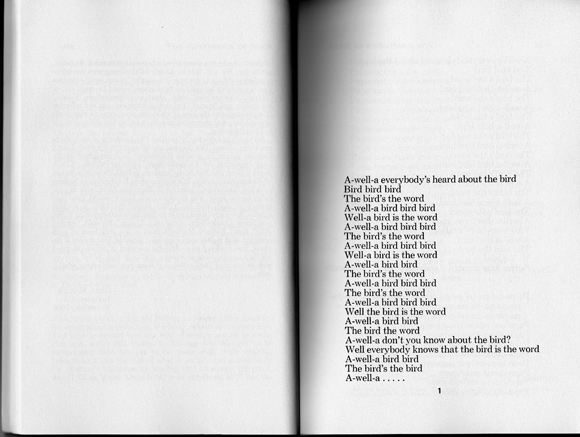 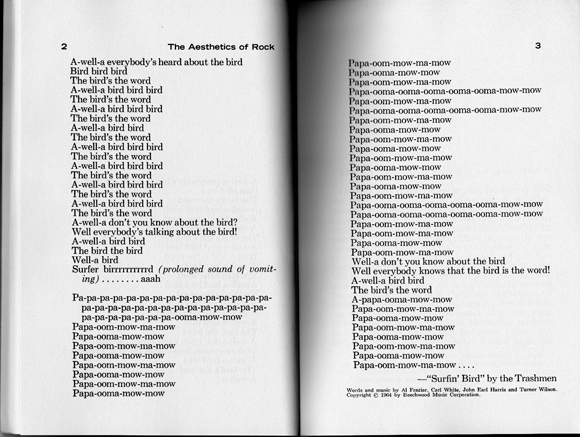 The introduction we wrote for these lyrics was as follows:

When we think of modernism, we think of Surfin' Bird. This song, originally recorded in 1964 by the Trashmen, later covered by bands like the Ramones and the Cramps, stands firmly in the tradition of sound poetry (think Schwitters' Ursonate). There are other links to early modernism: while the nonsensical phrase 'Papa-Oom-Mow-Mow' seems quite similar to the absurdity of the name Père Ubu (Papa Ubu, the lead character of Alfred Jarry's play Ubu Roi), the insistence that "the bird is the word" echoes Augusto de Campos' definition of concrete poetry as "the tension of thing-words in space-time". What else is the bird than a 'thing-word', surfing in 'space-time'?
But the idea of Surfin' Bird as a prime example of modernism goes much further than that. The song is a manifestation of the very spirit of modernism: Man trying to cope with the tension between nature and culture, between the primitive and the civilized. Surfin' Bird is a clear sublimation of this tension, a primal scream made electric. Even the lyrics seem to point to this synthesis of nature and culture, the concept of a surfing bird being an emblematic example of a civilized animal.

But above all, there is the break, the moment in the song where the instruments stop, and the vocals seem caught in a vacuum. It is the break that separates the first part of the song (the 'bird is the word' part) from the second part (the 'papa-oom-mow-wow' part). It's a break that cuts through the song like a slash in a Fontana painting, and it gives the song its characteristic duality; the duality that is so typical for manifestations of modernism in general.
In the transcript of the song, included in the following pages, the words that are uttered during this break are described as a "prolonged sound of vomiting". We very much disagree. What can be heard in the break is in fact a human voice simulating an echo machine, a guitar reverb effect. This thrilling moment, of man imitating machine, is again a clear example of the tension between nature and culture, of modernism in its purest form.

The Ultramoderne show later travelled to Brest, where it ran at Centre d'Art Passerelle, between February 29 and April 26, 2008. Participating artists (for both Luxembourg and Brest) included people like Armando Andrade Tudela, Karina Bisch, Martin Boyce, Nicolas Chardon and Jens Wolfs; all artists we greatly admire. Thanks to the curators for inviting us.

next: Everything That Exists