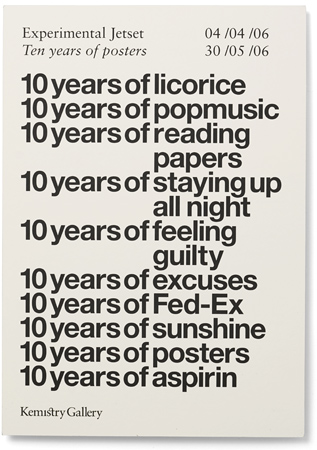 Towards the end of 2005, we were contacted by Polly Betton of the Kemistry Gallery, who asked us wether we we would be interested in a solo exhibition in London. We were in fact interested, and a date was set in April/March 2006.

We have had solo exhibitions before (31 Flavours of Doom in 1999, Kelly 1:1 in 2003, to name a few), and usually we create site-specific work on those occasions. We always thought this was the true designer's way to do it: to react to a specific place, theme or context.
This time, however, we weren't so sure anymore. A couple of weeks before we were asked by Polly, we went to an exhibition of a designer we really admire. His exhibition was divided in two parts: a site-specific installation, and some glass showcases displaying older work. We suddenly realized we liked the older work much better than the site-specific work. All these old record sleeves, posters and flyers, all with their own history, displayed in stiff, museum-like vitrines: it actually looked fantastic.
Thinking about our own exhibition, we realized that we actually didn't want to do a site-specific installation at all. We thought it would be interesting (especially to ourselves) to really see a large amount of older work together; to reveal unexpected relations, differences and similarities.

So we decided to simply show a selection of posters. After all, posters were made for walls; it would be easy to display them. We also decided on the most basic title ever: 'Ten Years of Posters'.
There were a couple of things that felt slightly wrong about this whole concept; it was all a bit 'off'. First of all, we don't really consider ourselves proper 'poster artists' in the heroic sense of the word; we aren't the typical flamboyant creators of expressive, painterly affiches. The posters we design are usually by-products of larger projects: graphic identity programs, exhibitions, etc. They are often made at the last moment, when someone suddenly realizes that there might be some money left in the budget for a poster. So to dedicate a full exhibition exclusively to posters seemed a bit strange.
Added to that, the title 'Ten Years of Posters' also suggested a ten-year anniversary of our studio, which wasn't the case at all. Marieke and Danny started collaborating in 1997, Erwin joined in 1998, so depending on how you look at it, in 2006 the studio existed either eight or nine years.
But we still liked the title 'Ten Years of Posters' a lot. Especially because we knew that it contained a sort of built-in awkardness.

Kemistry sent us their floor plans, and we began planning the exhibition. There were three walls we could use, so we started selecting posters. We actually made little maquettes, cardboard models of the space, to decide where we should hang which poster. We haven't photographed these maquettes yet, but shown below a flat digital image of one of our sketches:

When we arrived at the Kemistry, we immediately had to rearrange the composition we had in mind, as the measurements that were given to us were plain wrong. But that didn't really matter; we enjoyed shifting and replacing the posters on the spot. Shown below some details of the actual exhibition: 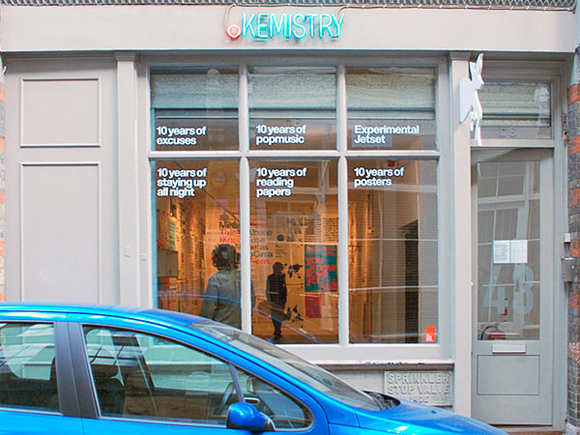 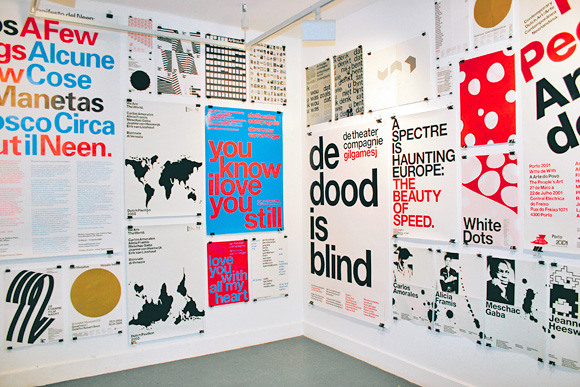 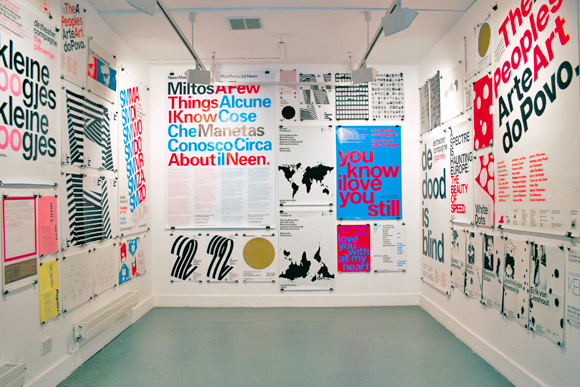 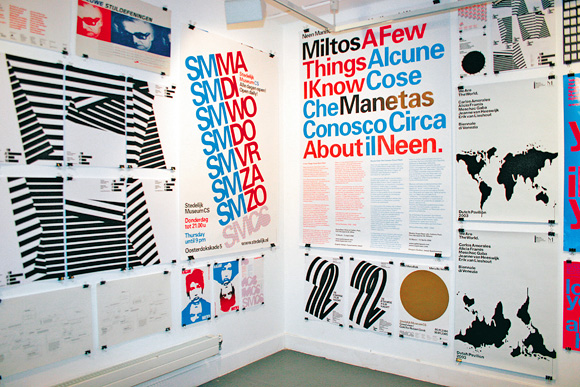 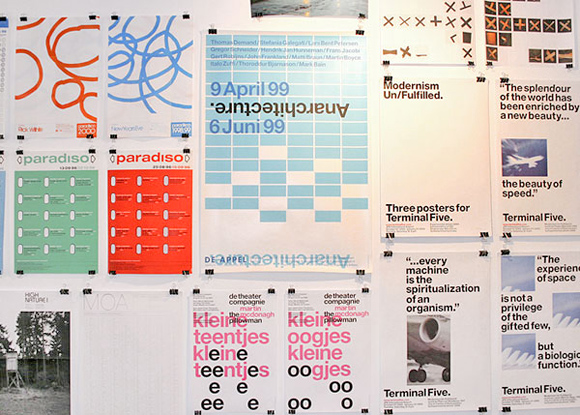 (We mounted the posters on the wall using LPC Double Clips, which are clips we are obsessed with; our whole studio is flooded with them. Not only we love the clips themselves, but also the packaging: beautiful red boxes with condensed typography, and black line drawings of the clips. In a corner of the Kemistry, we actually built a miniature installation, consisting of the empty boxes that remained after we used all the clips. We have no photos of that, unfortunately).

A very important part of the exhibition was an A3-sized map that we designed, a diagram-like list containing captions, dates and titles, that could be used to navigate through the mass of posters on the wall. These A3 prints were stacked on the counter, for the visitors to take away. A PDF-file of this map can be downloaded below:

As can be seen in the PDF above, the black boxes indicate the posters, while the numbers correspond with the captions below. (We could have shown images of posters instead of black boxes, but we didn't want to do that; we liked the fact that the map would only function within the context of the exhibition. If we would have showed actual images of posters, the map would have been too 'complete', as it then could function outside the context of the exhibition, and we didn't want that).

Shown at the top of this page, the image we designed for the invitation (front). We kept it textual, and listed some things we had been doing for the last ten years. We mixed it with some lyrics from a Belle & Sebastian song that we really liked: "Seven weeks of reading papers / Seven weeks of feeling guilty / Seven weeks of staying up all night" (from the song 'A Summer Wasting').
We also put some of these phrases in the window of the Kemistry (photo below courtesy of Blanka): 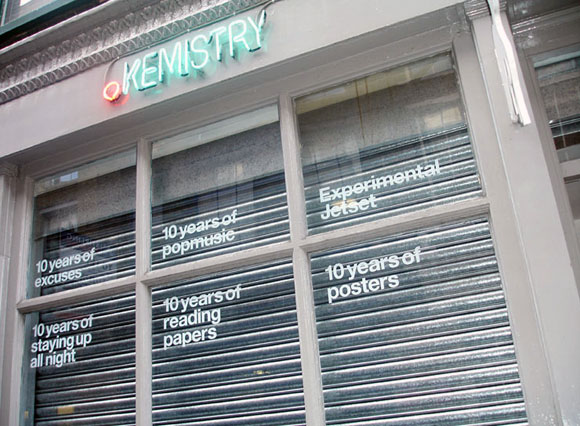 The exhibition ran from April 4 to May 30, 2006. A year later (July/August 2007) we did something similar at The Narrows, a really nice exhibition space in Melbourne (see The Narrows).

Thanks to Polly Betton and Dan Witchell of Kemistry Gallery, and to Yoshi Kawasaki for the 2K/Gingham sponsoring.