The series of invitations we designed for SMCS consisted of four one-sided A3-sized posters, all four folded to an A5 format. Shown below the first invitation, folded to an A5 (and containing an inserted card). 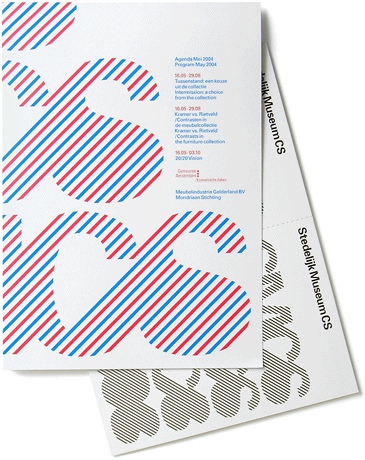 This first invitation, the one for the opening of the building itself, basically shows the unveiling of the logotype: all four versions of the logo are used, in various grades of abstraction.
Unfolded, the invitation turns into an A3-sized mini-poster: 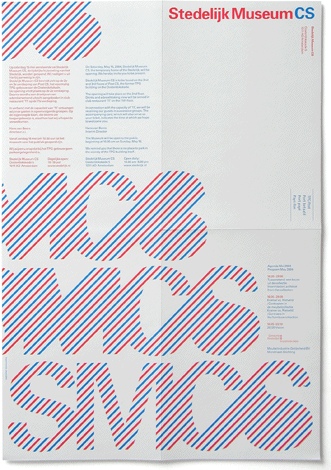 We left the right upper corner of the poster empty, so that it could contain an address sticker. As can be seen below, when the poster is folded to an A5-format, it should function as its own envelope: 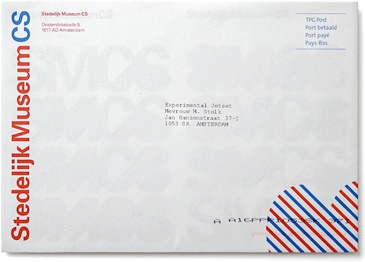 With the first invitation, an A5-sized card was included, with a perforation in the middle, turning it into two A6 cards. One A6 card would function as an admission ticket, the other one as an RSVP reply card. 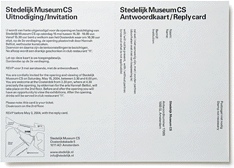 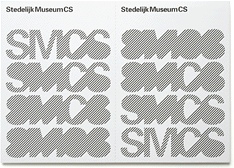 The second invitation was for the opening of Mark, a Municipal Art Acquisitions exhibition on the subject of graphic design. The theme of this exhibition revolved around the concept of the 'signature', the personal mark of the designer (hence the title of the exhibition, Mark).
To refer to this idea of the personal dimension of design, we showed only the first names of the artists, to suggest some sort of 'first-name-basis' between the user and producer of the design. Also, we liked the fact that the list of names turned the title of the exhibition, Mark, into a name as well. This underlines the idea of familiarity and personality.
Added to that, the list of names refers to some of our own past work (for example the John & Paul & Ringo & George shirt we designed for 2K/Gingham). In other words, in this invitation we deliberately hid our own mark.

Again, the space in the right upper corner was left empty, so it could be used to print an address on; as with the first invitation, this invitation was sent folded, without an envelope.
In the folded invitation, an A5-sized card was enclosed, on which all the names were printed again. This card functioned as a kind of 'multiple', a typographic group portrait of all the artists.
Shown below the A3 invitation, unfolded, with the A5-sized cardboard insert next to it: 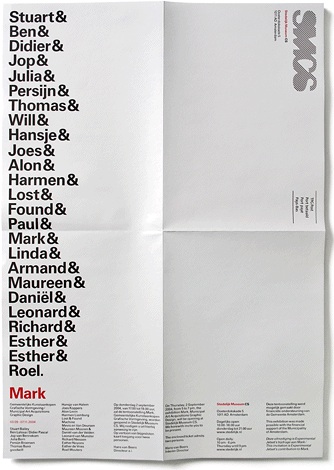 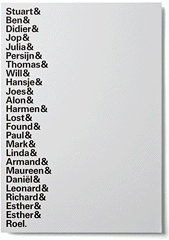 Followed by an image of the invitation folded to an A5 format, sporting an address sticker (or better said, an address print). 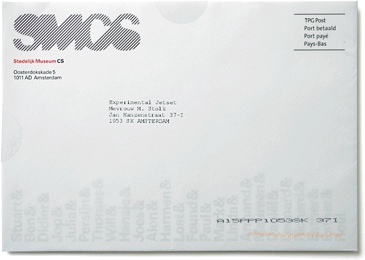 The third invitation was for the opening of Time and Again, a group show of young Polish artists. (Time and Again was actually part two in a series of exhibitions called 'Who if not we should at least try to imagine the future of all this', developed as a part of Thinking Forward, a cultural program related to the European Union).
This invitation was printed on two A3-sized pieces of actual carbon copy paper. On the one hand, the use of this sort of copy paper referred to the title, Time and Again, and the act of repeating that seems apparent in this title. On the other hand, the use of these bureaucratic carbon copy sheets loosely referred to the post-post-soviet theme of the show. The invitation was folded in such a way that the sentence 'Time and Again' unfolded itself in three steps when opening up the invitation: 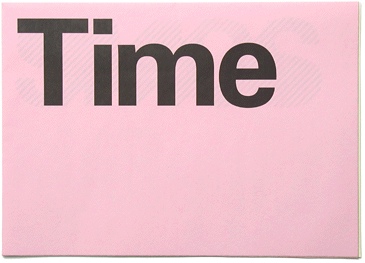 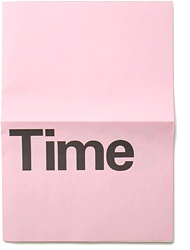 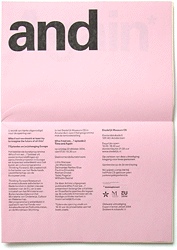 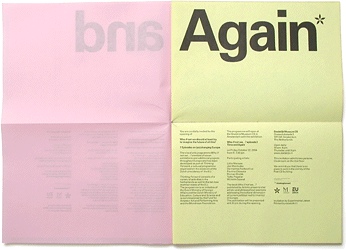 The fourth invitation was for the opening of Metallic Yellow, an exhibition that combined two events: 1) a solo exhibition of Robert Smit, an artist who designs mainly gold objects, and 2) a group show of other artists working in gold, selected by the same Robert Smit. This exhibition was organised on the occasion of the awarding of the 'Francoise van den Bosch' Prize to Robert Smit.

The gold disc that we printed on the invitation has the exact size of a 12-inch record, a reference to the 'golden album', an award that is quite common in the pop industry. Although Robert Smit was awarded with a totally different prize, we still thought the reference was appropriate. Added to that, the golden disc on the invitation also stands for the sun, as we argued that the fascination for gold is actually a covert form of solar worship.

A variation of this A3 invitation was later published as an A2 poster. (See: SMCS / Printed matter).
Shown below the invitation in its folded form (A5-sized) and in its unfolded form (as an A3 mini-poster): 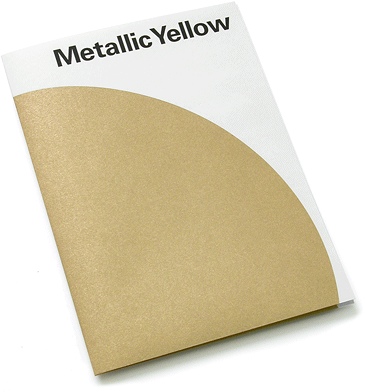 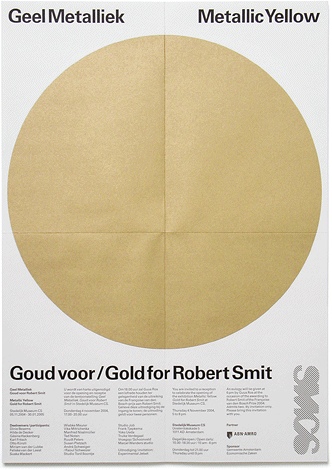