Between 1995 and 1999, we designed various posters and flyers for Paradiso, Amsterdam's premier rock venue. Paradiso plays an important role in the recent history of Amsterdam, and in Dutch counter- and rock-culture in general, so it is a real honour to have been involved with this place. It also has a rich history of graphic design (Martin Kaye's amazing concert posters, to name one example), so we’re proud to stand in that tradition.

In 1995, we started working on a series of flyers for Paradisco (see Paradiso / Paradisco). This series became an unexpected success, and so we were asked, in the middle in 1996, to create a program poster for Paradiso: a template for a three-weekly poster announcing all upcoming concerts.

Our plan was to make a poster that would refer to its surroundings. We knew these program posters would be hanging on poster walls in bars and record stores; walls completely filled with layers of posters. We thought it would be nice to do something with this idea of layering. That’s why we designed a poster containing holes. On a poster wall, the posters underneath would be visible through these holes, creating unexpected framings.

Shown here a selection of four posters that we designed: 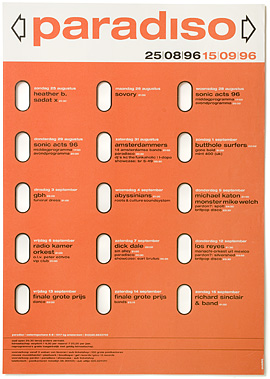 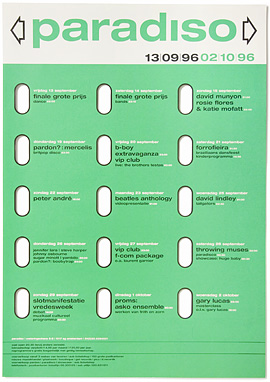 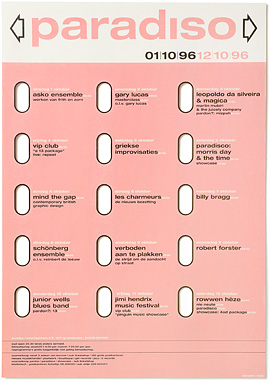 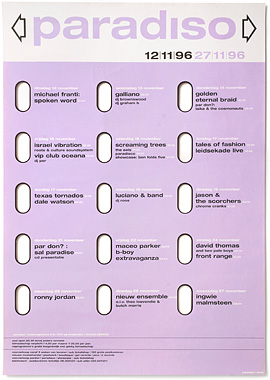 If the perforated posters are hanging on a background without posters, the holes show the colour of the background, which is an interesting effect as well (although not as interesting as the unexpected framings mentioned above).
And if the posters are hung on top of each other (as is usually the case in front of Paradiso, where the program posters are just pasted layer upon layer), the holes turn into really nice tunnels of colour, showing all the coloured layers underneath, like a gobstopper; a really nice effect as well.

The first poster we created isn’t shown; we haven’t photographed it (yet). It is a blue poster, running from 09.08.96 to 01.09.96 (featuring upcoming events like Los Lobos, the Wailers and the Butthole Surfers).

We actually only created the first six or seven posters. After that, we gave the template to Paradiso, who are using this template to this very day.

On the poster, we placed the word ‘Paradiso’ between two arrows. On the one hand, these arrows refer to the ‘stereophonic’ mark that can be found on old record sleeves. But more importantly, the arrows refer to the idea of a continuous time-line: there’s an arrow pointing back (to the past), and forward (to the future). We thought it fitted quite well within the context of a program poster.

Just like the rounded flyers we designed for Paradisco (see Paradiso / Paradisco) and the perforated flyers for Bassline (see Paradiso / Bassline), the program posters for Paradiso are really early examples of our interest in the physical dimension of printed matter; the fact that by perforating, cutting or folding, it is possible to emphasize the ‘thingness’ of the designed object.