Since 2007, we've been responsible for the graphic identity of the Maastricht-based architecture institute NAi Maastricht, which in 2009 changed its name to NAiM / Bureau Europa. (In 2013, the institute even dropped the NAiM-part, and is currently simply known as Bureau Europa).

'Panels' was a site-specific installation, created especially for NAiM / Bureau Europa by sound artist Paul Devens. Exhibited between September 12, 2010, and January 16, 2011, 'Panels' consisted of a set of sliding arches, installed in the semi-circular concrete Wiebingahal (the hall situated at the top floor of the NAiM building). By mechanically controlling the movement of these huge arches, the sound (and light) in the hall could be manipulated. More information about the installation can be found here and here.

For 'Panels', we created a graphic language that we used in different ways, all throughout the exhibition. Thinking about the shapes of arches, and the idea of sonic architecture, we came up with a typology of graphic signs, which we used to replace the vowels 'A' and 'E', in the word 'PANELS'. By using these graphic signs, we tried to refer to the notion of sound, of sound-waves, and of acoustic phenomena. Everytime we used the word 'PANELS', we used a different combination of these signs, as if the vowels were constantly pronounced in a different way.

As always, the invitation consisted of an A3-sized mini-poster (offset-printed by Lenoirschuring), folded into a A5-sized folder. These are a couple of images of the invitation, both in its unfolded (A3) and folded (A5) form: 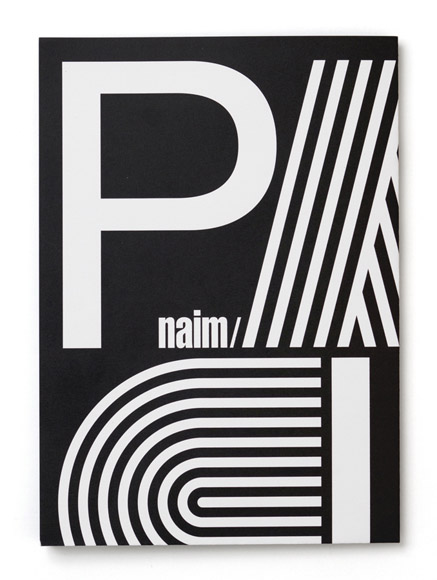 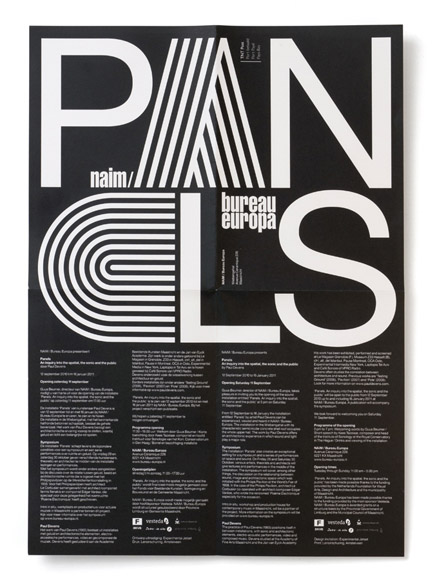 The poster (A0-sized, screenprinted by Wyber Zeefdruk) followed the same idea – the word 'PANELS', with the vowels replaced by 'sonic signs': 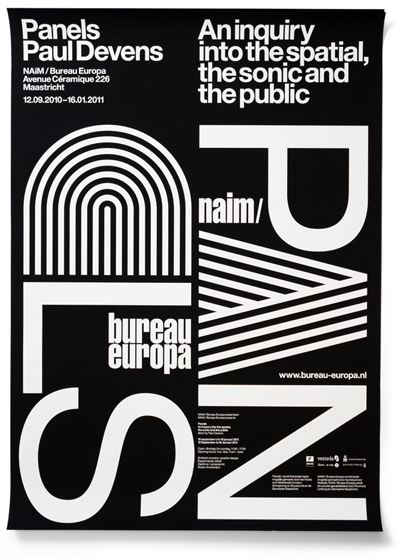 As usual, we also created an A2-sized variation of the poster (offset-printed by Lenoirschuring). As can be seen here, the vowels are again replaced by a different combination of signs. (Not shown here yet)

We also designed a 'mini-sign-system' for the exhibition, consisting of a series of panels placed in the staircase. On these panels, we used the 'sonic signs' as arrows, leading the visitors upstairs to the Wiebingahal.
Here you'll see a couple of quick snapshots, showing these panels. Some of the pictures show the panels installed in the staircase, while other pictures show all the panels standing next to each other, while we were preparing them. (Not shown here yet)

The window lettering is a regular item within the graphic identity of NAiM / Bureau Europa – whenever there is an exhibition, we quickly design some typography to be displayed in the window. 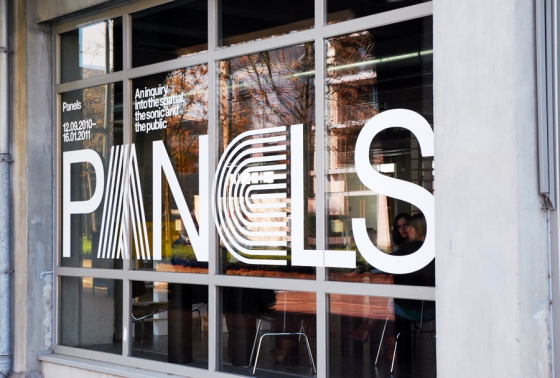 For this symposium, we designed a couple of items. First of all, here's a simple A3-sized invitation (again offset-printed by Lenoirschuring), showing yet other variations of the word 'PANELS'. This A3-sized sheet was then folded to (and shipped as) an A5-sized folder. Shown here is the invitation, both folded (A5) and unfolded (A3): 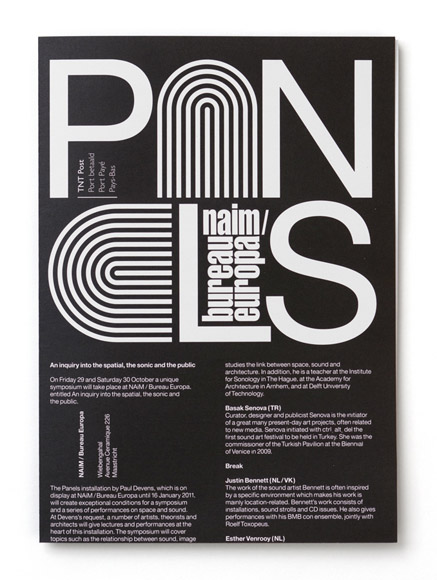 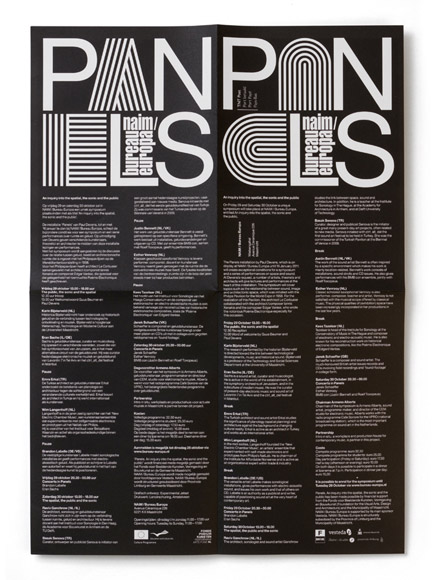 We also designed some printed matter that was handed out during the symposium – a program folder, a list of speakers, etc. Here's one of the hand-outs we created. Again, an A3-sized sheet (this time printed by QS Graphics), folded to an A5-sized folder: 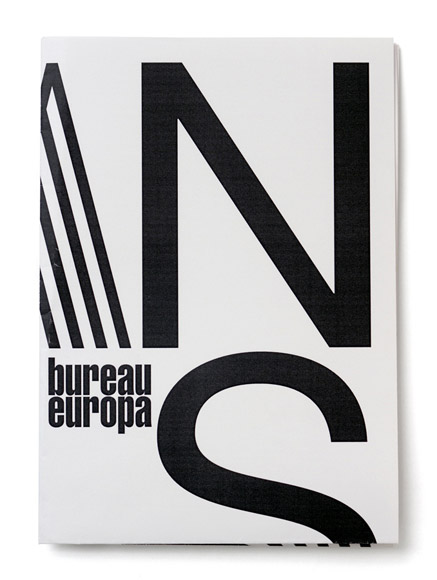 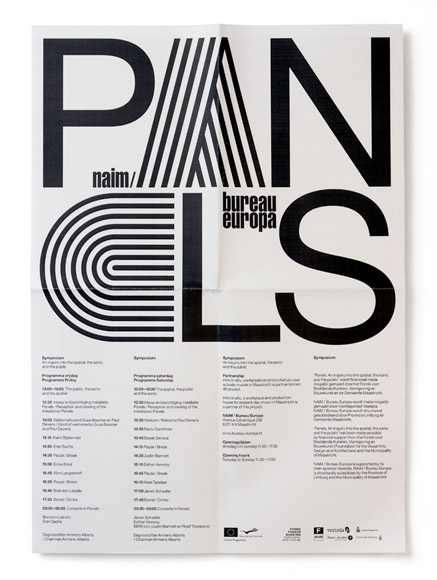 On the occasion of 'Panels', NAiM / Bureau Europa also released an audio-CD, featuring work by Paul Devens, Kees Tazelaar, Raviv Ganchrow, Janek Schaefer, The New Electronic Chamber Music Ensemble, Esther Venrooy, Grunewald/Finkelstein/Zupraner, BMB Con and Brandon Labelle. This CD was distributed during the symposium, and was later also inserted in issue 106 (November 2011) of Dutch music magazine Gonzo Circus.
These are some photographs of the sleeve we designed for this CD – the front, the back, and the print on the CD itself: 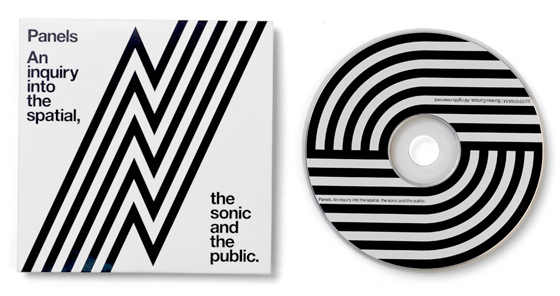 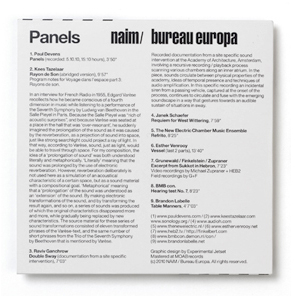 Finally, we designed a 10-page publication, which appeared as an insert in issue 105 (September 2011) of the Dutch music magazine Gonzo Circus. We haven't had the time (yet) to photograph this publication, but 'flat' digital files of these spreads can be found here.