Since 2007, we've been responsible for the graphic identity of the Maastricht-based architecture institute NAi Maastricht, which in 2009 changed its name to NAiM / Bureau Europa. (In 2013, the institute even dropped the NAiM-part, and is now simply known as Bureau Europa).

'Clip/Stamp/Fold' was an exhibition (on the subject of architectural fanzines) that was developed around 2006 at 'Media + Modernity', the post-grad research program at the School of Architecture at Princeton University (headed by Beatriz Colomina). This exhibition arrived at NAiM / Bureau Europa already 'pre-designed' – it was a traveling exhibition, with the graphics already included.
So for 'Clip/Stamp/Fold', we weren't really asked to design any graphic elements in the exhibition itself – rather, we were responsible for the usual, more exterior 'institutional' layer: the posters, the invitation, the window lettering, etc.

Thinking about the theme (and title) of 'Clip/Stamp/Fold', we immediately had to think about the staple. After all, in the process of 'zine-making', isn't stapling at least as important as clipping, stamping and folding?
On top of that, we always really liked the notion of 'het nietjesproletariaat' ('the staple proletariat'), a phrase we once came across, basically a term that was used to describe the subculture of fanzines. Now, we don't know anymore just where exactly we stumbled upon it (we vaguely remember it was in an article about the history of Dutch bookstore Athenaeum – we can't seem to find this article anymore), but we always liked that phrase: the staple proletariat. So it made sense to focus on the humble but noble staple.

(And now that we think about it – there was one other reason why we had staples on our minds: the fact that we really love the logotype of Staples, the US office supply store. In that logo, the letter 'L' is replaced with a stylized staple – this was something we always liked).

We photographed a couple of staples in our studio, blew them up, and made them more graphic. That way, we created a typology (or better said, a sort of mini-alphabet) of different staple-shapes. We used these staples all throughout the graphic identity of Clip/Stamp/Fold, in an almost typographic way, creating combinations that looked like abstract acronyms.

First of all, here's the invitation. As usual, the invite is an A3-sized mini-poster (offset-printed by Lenoirschuring), folded to (and shipped as) an A5-sized folder. We overprinted the staples with silver shapes, underlining the metallic sharpness of the staples): 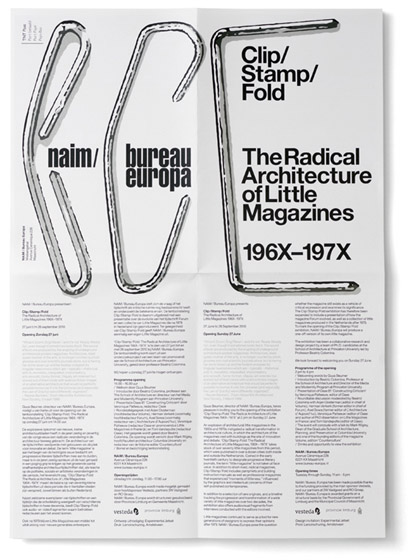 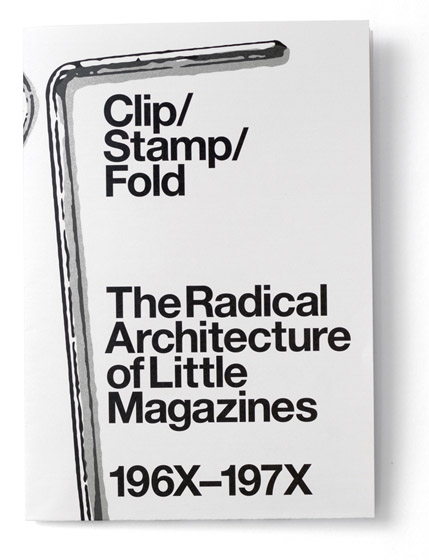 The staple motive was repeated on the posters. Here's first of all the A0-sized poster (silkscreened by Wyber Zeefdruk), again showing an almost typographic composition of staples, overprinted with silver: 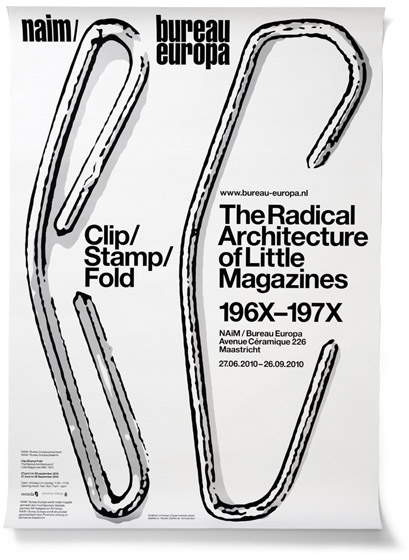 On the A2-sized poster (offset-printed by Lenoirschuring), we used a very different composition of staples. To be honest, this poster isn't really our favourite version. In retrospect, the composition was much too symmetrical, much too stable: 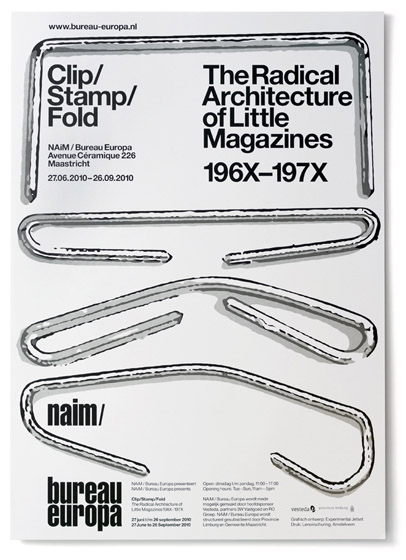 Another item designed by us was a small (A4-sized, 24-page) catalogue (offset-printed by Lenoirschuring), which included descriptions and images of the fanzines featured in the exhibition. Since the publication was bilingual, we used the silver/black colour-combination to distinguish between the English and the Dutch text. Shown here the front of this catalogue, click to see some images of spreads: 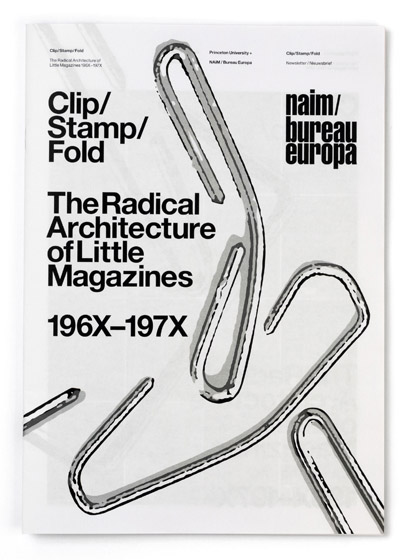 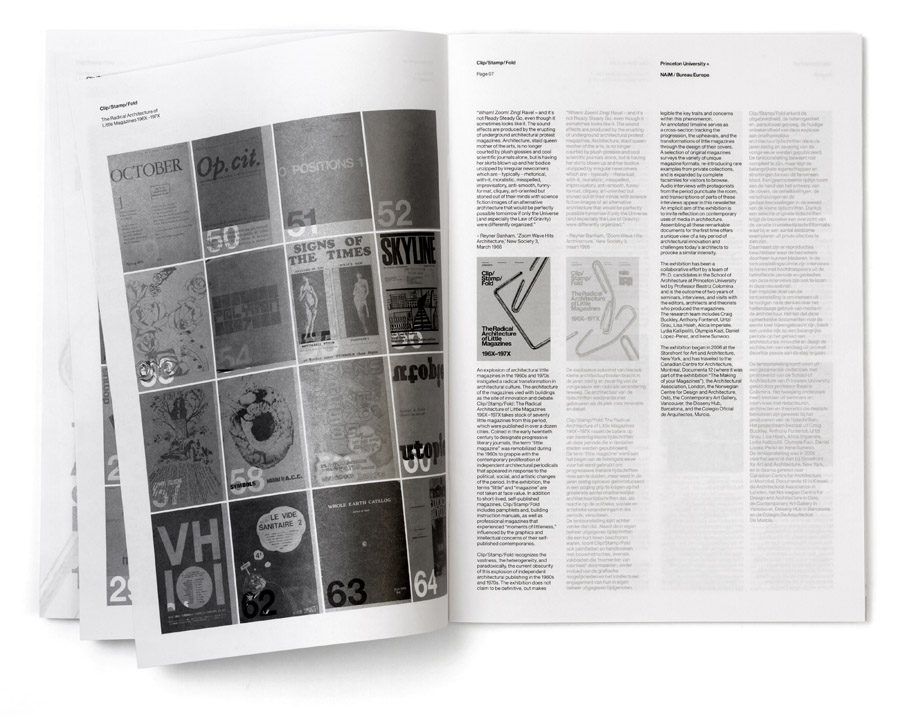 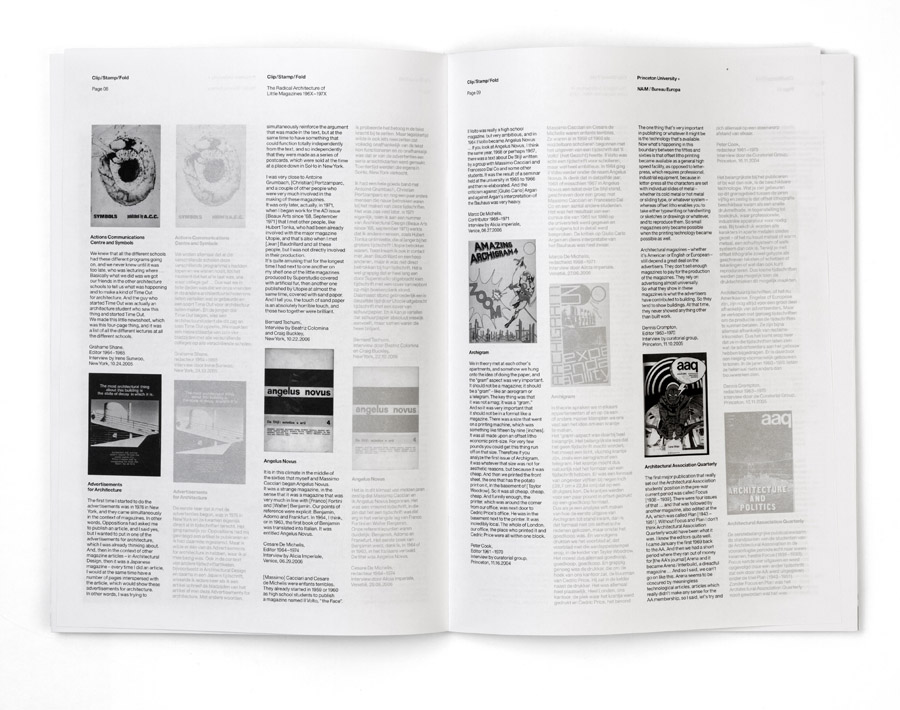 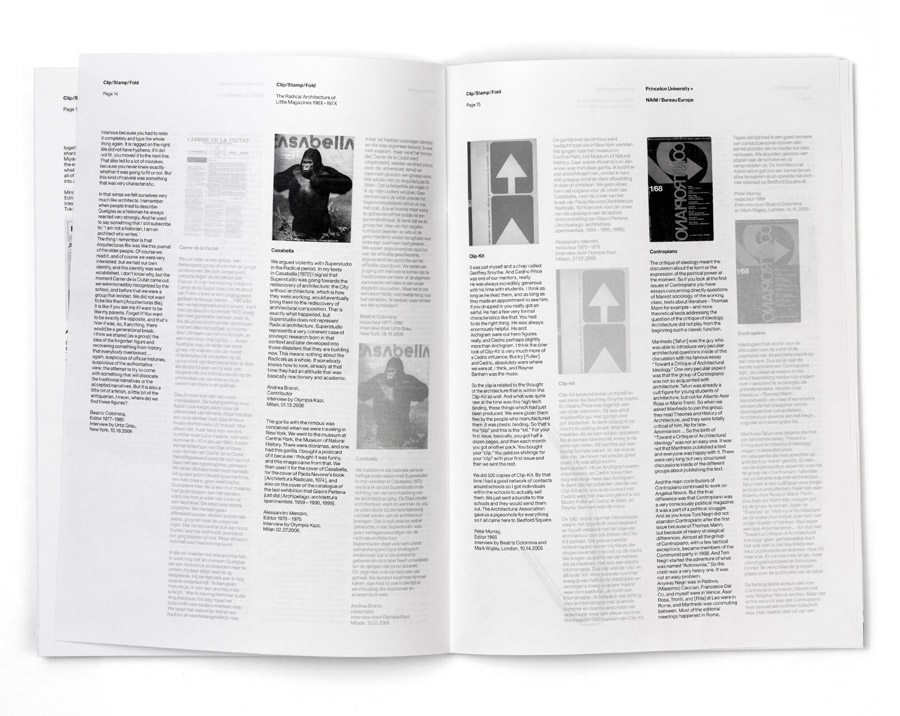 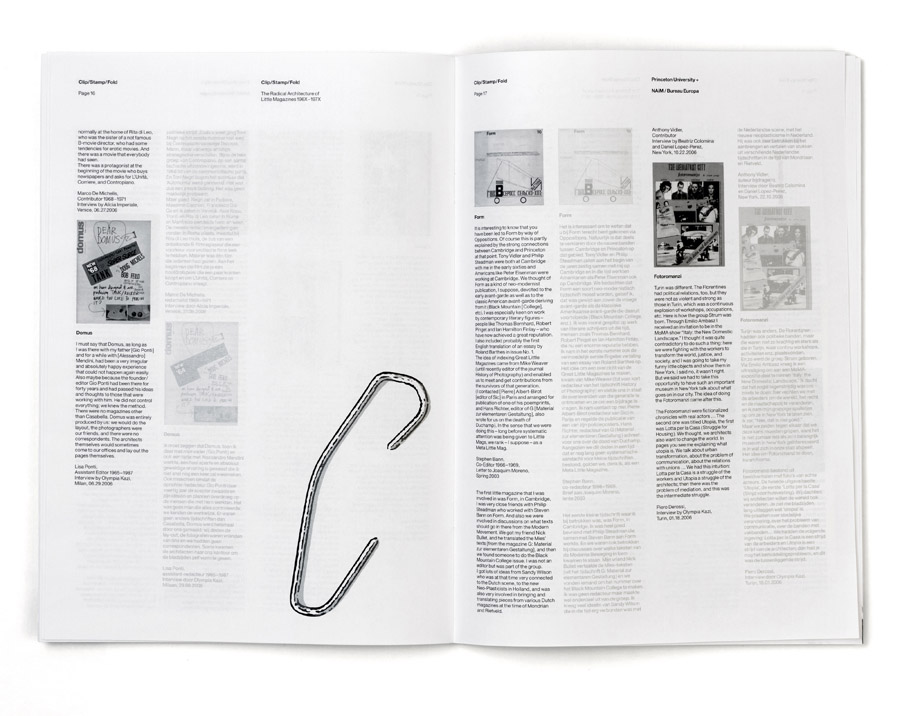 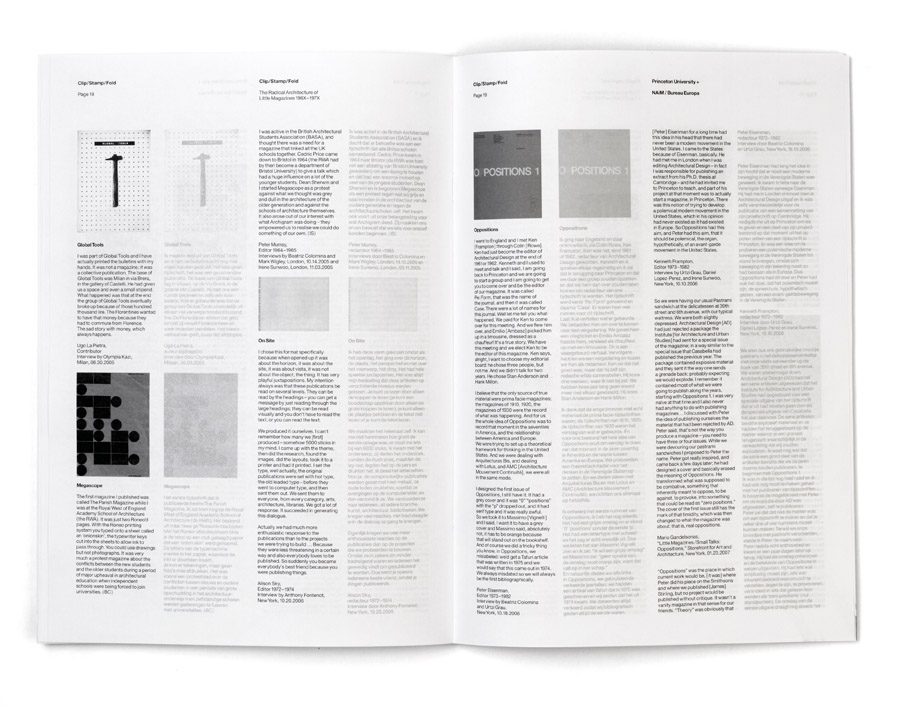 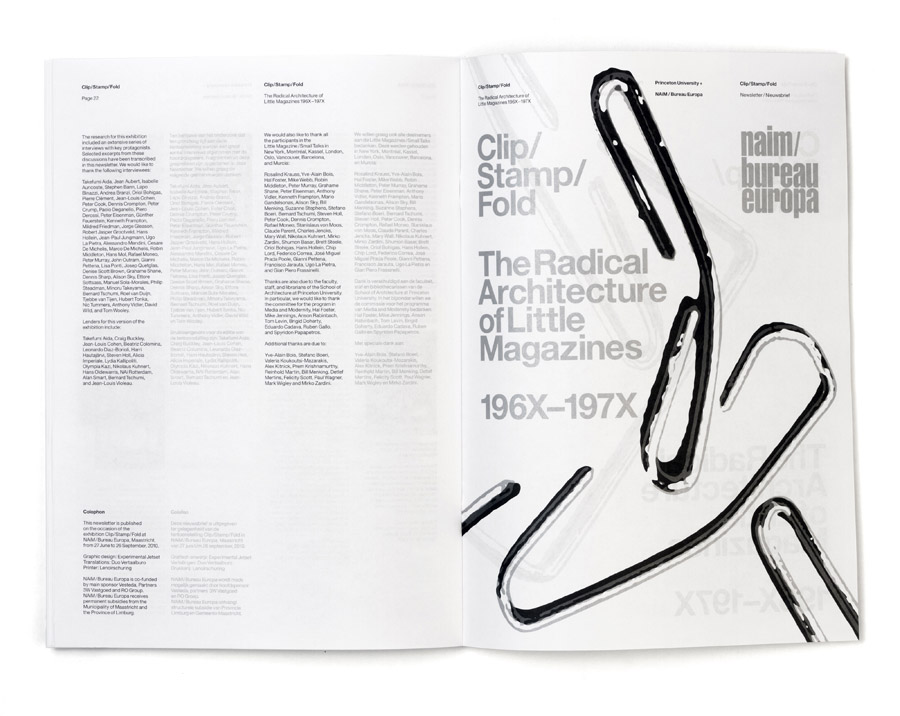 As we already wrote – the exhibition came 'pre-designed', with its graphic layer already included (a layer which included a wallpaper of magazine covers, plastic bubbles, etc.). Still, we were asked to design some lettering to appear in the exhibition: a title wall, some window lettering, etc.

First of all, here's a photo (by Johannes Schwartz) of some title panels we designed (again, we didn't design the wallpaper, just the title posters). Needless to say, we stapled these posters against the wall: 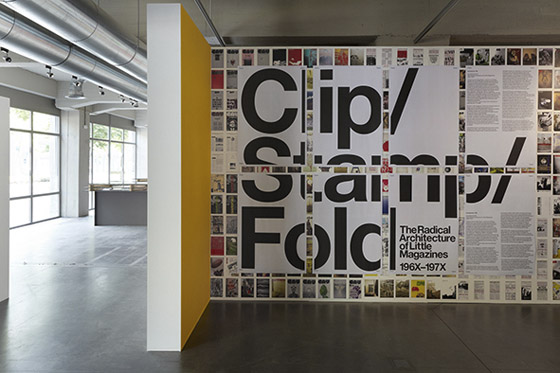 To turn the space into a graphic environment, we also placed the title on the back wall, echoing the window lettering. The photo is by Johannes Schwartz (and again, we weren't responsible for the wallpaper and the plastic bubbles): 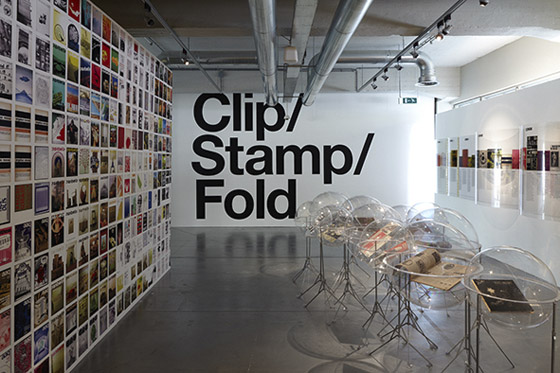 As we already wrote, this exhibition was a traveling project – it arrived at NAiM / Bureau Europa as a 'pre-designed' and 'pre-curated' show. However, within the the institute, there was still a need to add something new to it – an addition or supplement that was more site-specific, more context-sensitive.
That's why NAiM / Bureau Europa decided to add, to the 'core exhibition', two side-projects: a fanzine, specifically made for the occasion, and a small exhibition on the Dutch architectural magazine Forum.

For the fanzine, we came up with the name '& Staple'. We figured that, since the fanzine would be an addition to the main exhibition, its title should function as an addition as well. By adding '& Staple' to 'Clip/Stamp/Fold', the result would be the phrase 'Clip, Stamp, Fold and Staple'; which made sense to us.

The fanzine was basically a stack of 9 A4-sized sheets of paper, used in a horizontal/landscape way (oblong), and stapled in the left-hand upper-corner. This stack was then folded in two, to appear as an A5-sized zine. However, to read this A5-sized zine, it first had to be unfolded to its A4-sized, oblong state. This bilingual (English/Dutch) zine was printed in black and silver (offset by Lenoirschuring), and contained essays by Guus Beumer, Roemer van Toorn and Arjen Oosterman. These are some images showing this zine both in its folded (A5) and unfolded (A4) state: 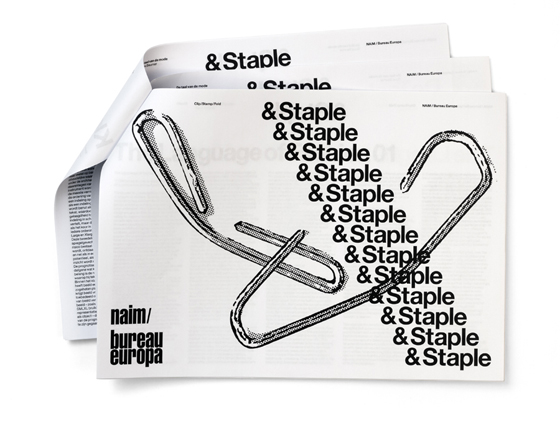 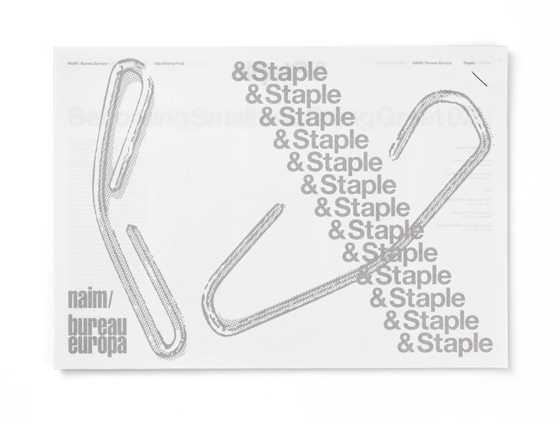 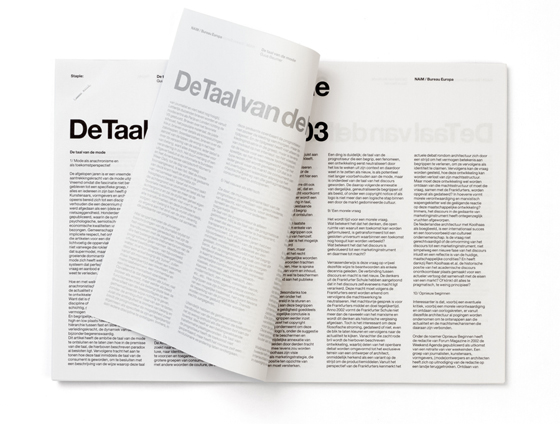 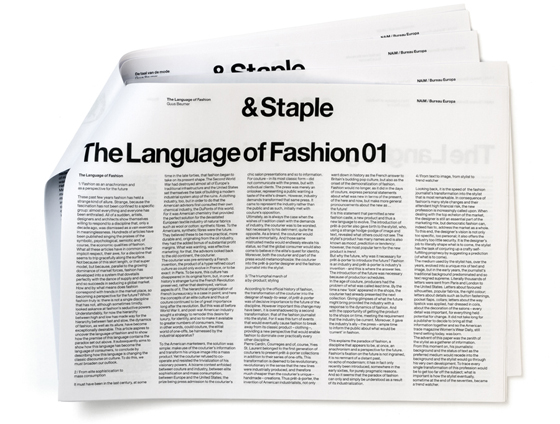 We also designed a couple of buttons/badges (37 mm), to go with the fanzine. If we remember well, the fanzines were packaged in a A5-sized ziplock bag, with some buttons inserted. In total, we designed four different buttons – but for some reason, we could find only one copy in our archive:

Another element that was added to the main show was a small exhibition on the subject of the Dutch architectural magazine Forum. This exhibition was based on a research project by Marina van den Bergen, and consisted of a couple of vitrines (display-cases) showing actual issues of the magazine, some video interviews with editors, and a series of posters presenting a sort of 'timeline' of Forum.
We designed these posters, and then simply stapled them to the wall. Shown here the series of posters (photo by Johannes Schwartz): 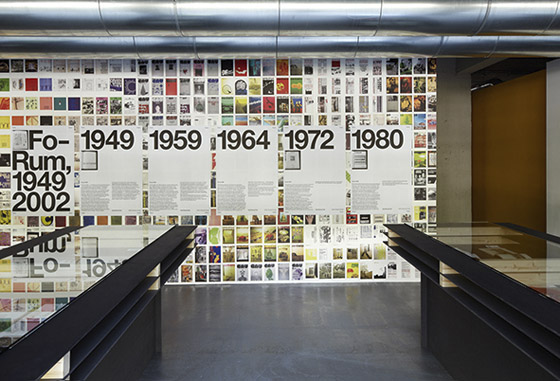 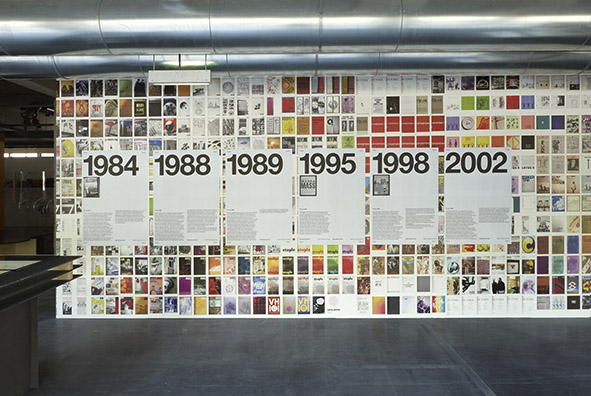 To hold the space together graphically, we also added, to the wall, the extra title ('& Staple'). It functioned mainly as an addition to the main title (which was displayed on the window, and on the wall on the right). Photo again by Johannes Schwartz: 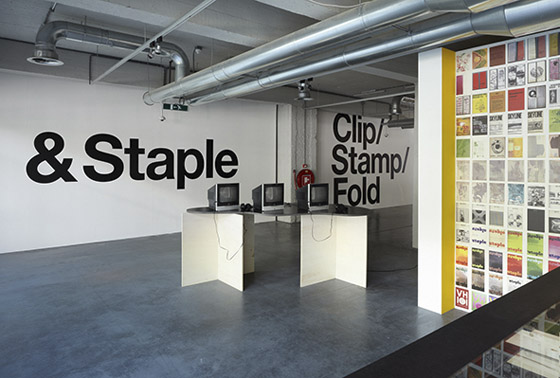 More information about the exhibition, as it took place at NAiM / Bureau Europa, can be found here.

next: MF / This is not my world