Since 2007, we’ve been responsible for the graphic identity of a Maastricht-based architecture institute which originally went under the name NAi Maastricht, but in 2009 changed its moniker to NAiM / Bureau Europa. (In 2013, the institute even dropped the NAiM-part, and is currently simply known as Bureau Europa).

‘Playboy Architecture 1953–1979’ took place between September 29, 2012, and February 10, 2013, and was the last NAiM exhibition that took place under the directorship of Guus Beumer. The exhibition was curated by the M+M (Media and Modernity) Program at the Princeton University School of Architecture, a post-graduate research project headed by Beatriz Colomina. The aim of the project was to explore the radical modernist dimensions of Playboy Magazine, and to investigate the magazine's influence on architecture and other forms of design (furniture, interior, etc.). 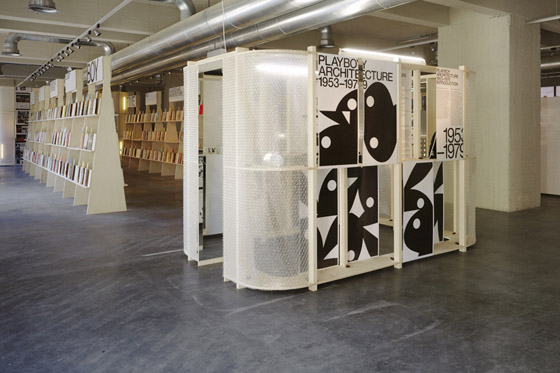 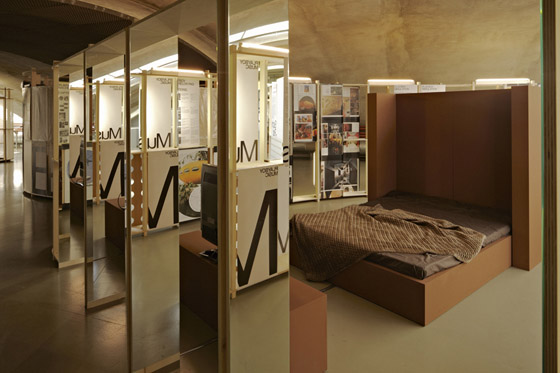 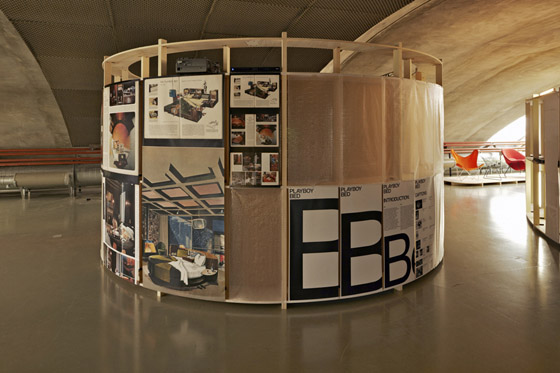 As with most of the exhibitions taking place at NAiM / Bureau Europa, the spatial constructions were designed by EventArchitectuur. Our part is then to come up with a (typo-)graphic intervention, specifically responding to these constructions. (Added to that, we are also responsible for all the other printed matter: posters, invitations, window typography, adverts, etc.).

‘Playboy Architecture 1953–1979’ was a huge exhibition, taking up both halls of the NAiM building. EventArchitectuur constructed a group of 12 separate installations, each space referring to a specific theme within the subject. In the meantime, we came up with a way to include, in these 12 constructions, all the information that was provided to us by the researchers of the M+M Program.

While working on the assignment, our studio was actually filled with a large amount of cardboard boxes, containing all issues of Playboy published between 1953 and 1979. Based on all the individual research projects, our task was to select and scan all the images needed to illustrate the given themes.
Our initial goal was to introduce a ‘sub-theme’: the theme of the ‘blow-up’. We hoped that, by gradually ‘blowing up’ the images, we would reveal the material base of printed material, in an attempt to undermine the images’ illusionary dimension (or at least, to strip away some of the material’s overpowering ‘sexiness’). Obviously, the ‘blow-up’ is a theme we worked with before, for example in this print we designed in 2007.
However, since we had to work within a limited amount of space, and had to use a certain number of specific images, the whole ‘blow-up’ theme couldn’t be executed as well as we originally intended. But traces of it can still be found in the typographic layer of the show. 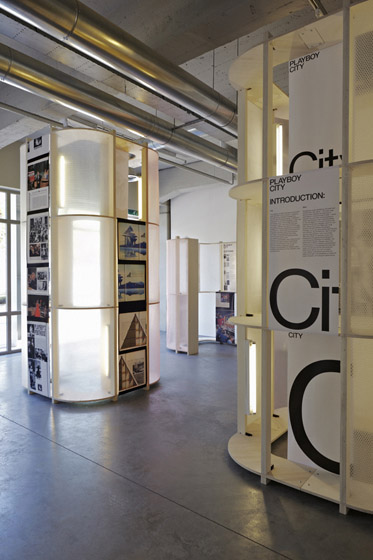 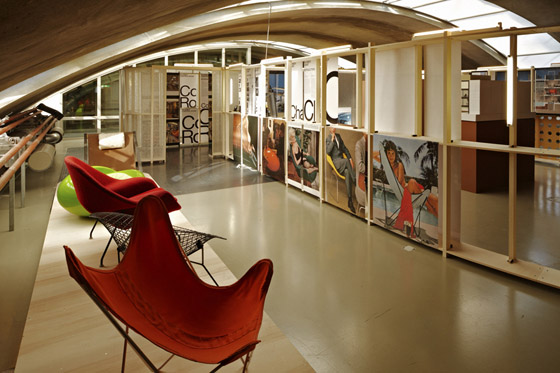 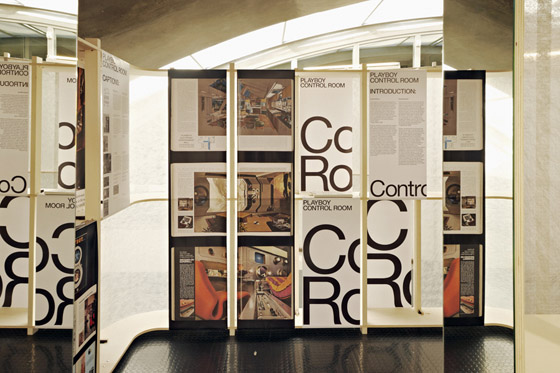 The way we placed the images and text in the wooden constructions refers to the material reality of printed matter as well. By printing all the graphic material on long paper strips of paper, we hoped to invoke the tactility of magazines. It was also a nod to the notion of the printing press, and the way in which, on these presses, long rolls of paper are weaved between the rolls of the machine.
Finally, the long strips of paper also refer to a particular sequence in the movie ‘Blow-Up’ (Antonioni, 1966): the ‘photo-shoot’ scene, in which the main character photographs a group of models situated between long, vertical panels: 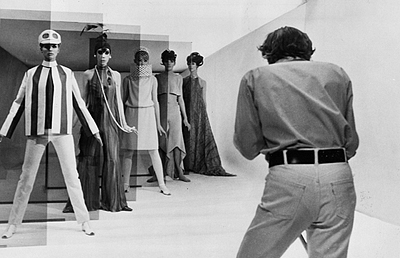 We just pinned these long strips of paper to the wooden constructions using casual thumbtacks (our intention has always been to come up with ‘non-monumental’ ways of displaying material, so that’s why we often make use of pushpins, thumbtacks, clips, staples or pieces of tape). The long strips of paper in the exhibition were actually printed by QS Graphics in Maastricht. 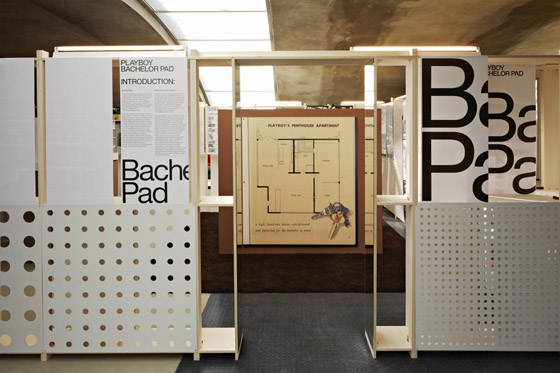 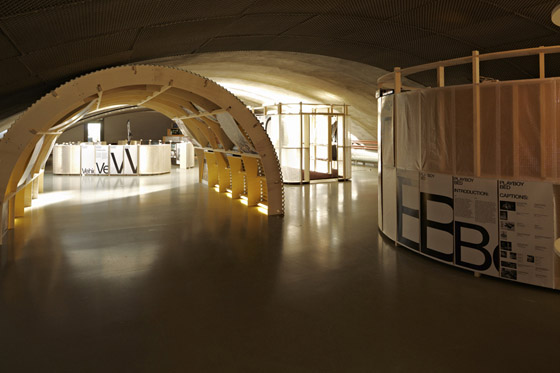 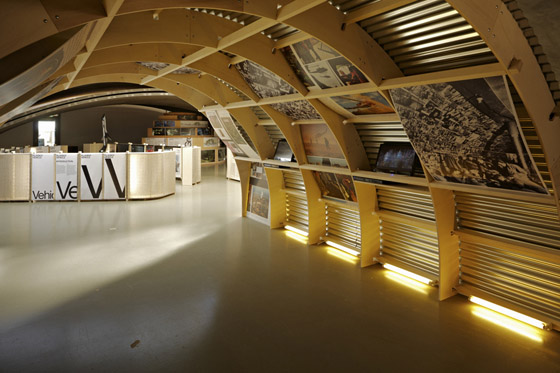 A central part of the exhibition was a set of huge wooden shelves, displaying all the issues of Playboy published between 1953 and 1979. These issues were shown in chronological order – but we also wanted to introduce a way to explore these issues thematically. That’s why we designed a system of colour-coded, bunny-ear-shaped bookmarks, each colour referring to a specific theme within the subject: 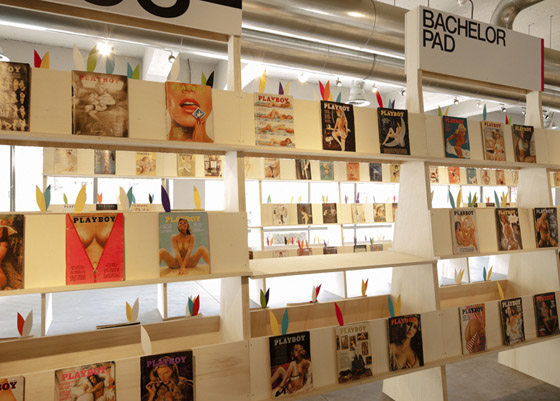 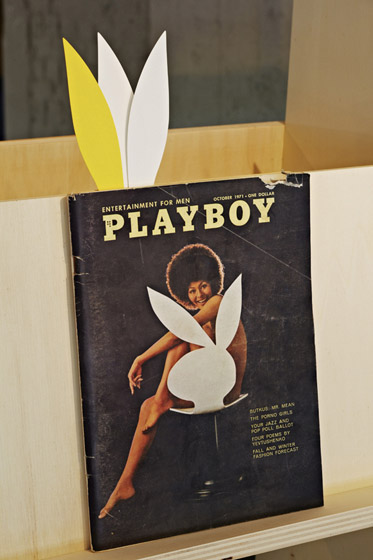 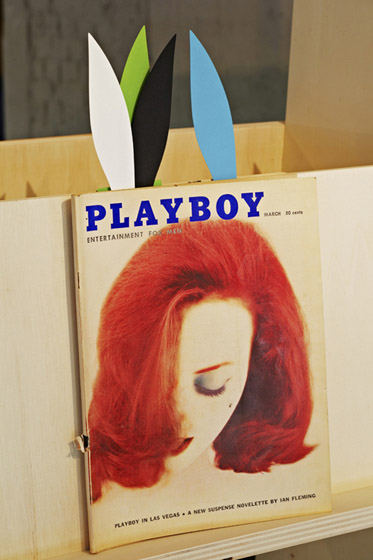 As part of the exhibition, one of the researchers (Federica Vannucchi) asked us to make a publication containing material from her research project. Her idea was to make a ‘Playboy’s Buying Guide’, featuring a selection of ‘shopping pages’ reproduced from issues of Playboy. We designed this publication as a low-key booklet – basically a stack of reproduced pages, printed in black ink on pink paper, overprinted with blue ink for the dates, folded in two, and then stapled. A5-sized, this booklet was printed by Dijkman Offset: 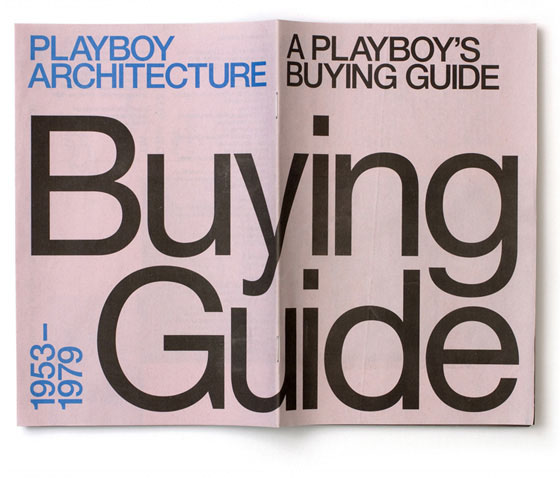 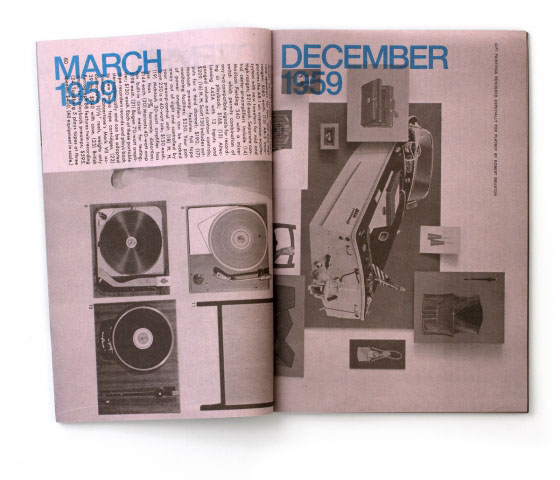 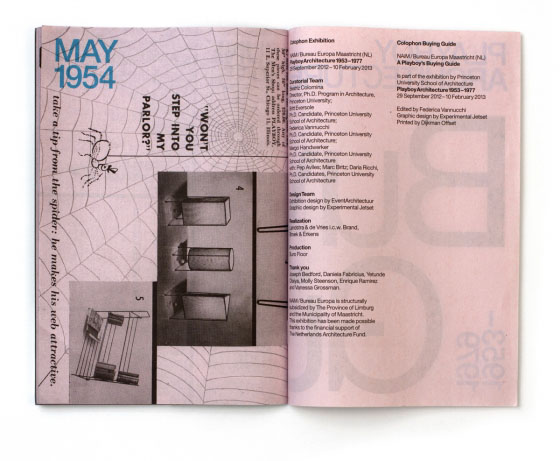 Another piece of printed matter we designed for the exhibition was the usual set of posters. In our design for these posters, we tried to deconstruct the iconic bunny logo in such a way that the result resembled an actual piece of space-age architecture, the eyes of the bunny resembling windows. Thus, the composition becomes a ‘multi-eyed’ entity, referring to some of the sub-themes within the exhibition (voyeurism, exhibitionism, panopticonism).
The colour pink refers to the notion of flesh, but is also an attempt to somewhat undermine the ‘machismo’ of the subject of the exhibition (after all, pink is often seen as an effeminate colour). 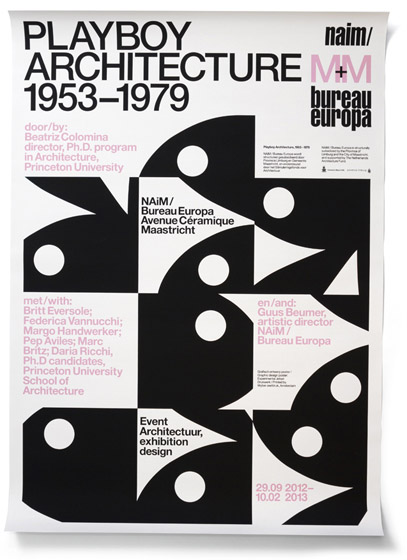 The A2-sized variation was offset-printed by Lenoirschuring: 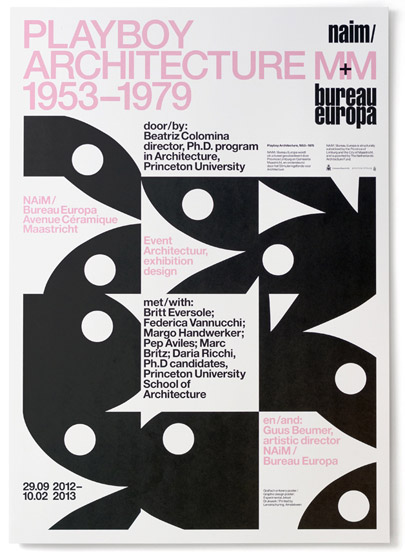 In the same manner, we designed an A3-sized invitation (to be folded to an A5-sized mailer). This item was again offset-printed by Lenoirschuring: 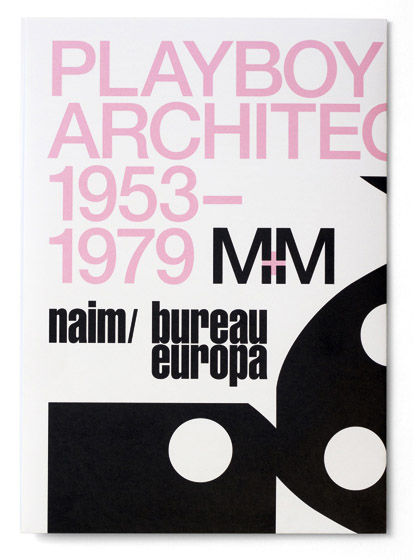 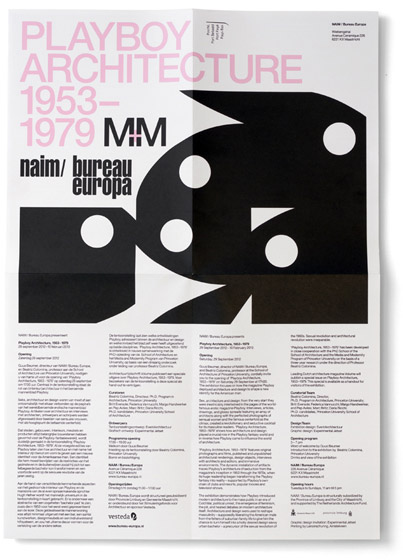 The window typography (here seen from the back) consisted again of the reconstructed ‘bunny-pattern’, the eyes of the bunnies forming little round windows, for passers-by to look through: 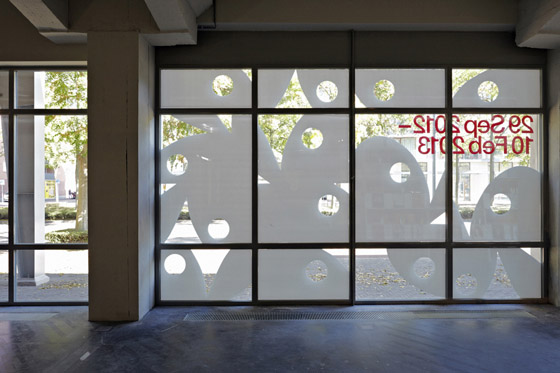 All the above photographs were either made by ourselves, or by Johannes Schwartz. More photos can be found on the websites of Bureau Europa and EventArchitectuur. The exhibition also included a soundtrack compiled by Femke Dekker (of My Little Underground).