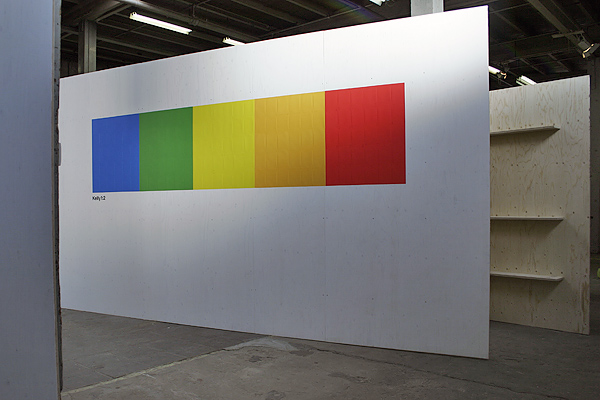 In October 2005, we were asked to participate in the group show 'Now and Again', an exhibition that was part of a larger design event called 'Utrecht Manifest'. Curated by Guus Beumer, Lisette Smit and Gert Staal, the exhibition was meant as an exploration of the concept of the past. In the view of Guus and Lisette, the most defining feature of contemporary art and design is its referring to the past, in contrast to modernism, which (to the curators) was a movement exclusively committed to the future (a view we disagree with, but more about that later).

We were asked by Guus and Lisette to revisit a work from the past, and we immediately thought about remaking the Kelly 1:1 installation we created in 2002 for Utrecht exhibition space Casco (when Lisette was still curator there). To read the full story, see Kelly 1:1.
We believed it was quite a fitting idea. Kelly 1:1 was itself a recreation of a classic Ellsworth Kelly painting. To do a remake of this recreation seemed like a good concept.

The problem was space. The original Kelly 1:1 installation (again, see Kelly 1:1) measured almost 6 x 1.5 meters. For Now & Again, every participating artist was placed in its own cubicle. We can't remember the exact measurements of the cubicle, but it sure as hell couldn't carry a six meter long work. That's why we decided to make a scaled-down version.
The original Kelly 1:1 consisted of 150 A4-sized sheets of coloured paper, together forming a life-size (scale 1:1) replica of a classic Ellsworth Kelly painting. For Now & Again, we were thinking of doing the same thing, but instead of A4 sheets, we would use A5 sheets. Hence the title, 'Kelly 1:2'.
(We know, mathematically the title is not correct. Using A5 instead of A4 doesn't create a 1:2 proportion; rather a 1:1.4 proportion. If we would have wanted to create a proper 1:2 version, we should have used A6 sheets. But poetic justice allowed us to call the project 'Kelly 1:2').

Anyway, shown below the cubicle, showing the finished work. 150 A5-sized sheets, together forming a scale model of Kelly 1:1. 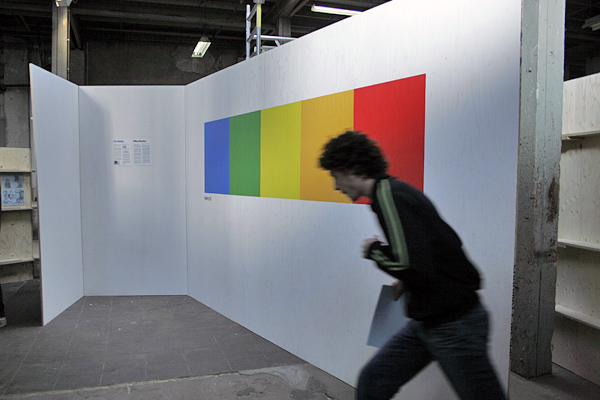 Next to the work, we placed two texts. The first text was a short explanation about the original Kelly 1:1 work (see Kelly 1:1). The second text was a sort of manifesto in which we expressed our thoughts about the theme of the exhibition.
Rereading that manifesto, we noticed that we were probably quite agitated; it a very bombastic, over-the-top text. As we already explained, what bothered us was the curators' view that an active interest in the past is automatically an post- or anti-modernist sentiment. We were quite bothered by that premise, that's why we wrote that manifesto.
To be honest, we really dislike rereading our own manifestos. We hate the aggressive and arrogant tone. We aren't the polemic kind. We actually stopped writing manifesto-like texts altogether. (We aren't really good writers anyway, but if we had to choose one genre of writing, we prefer answering interviews. Maybe that's because we are typical designers. Somehow, the dynamic between questions and answers is quite similar to the dynamic between problems and solutions apparent in design assignments).

Anyway, we enclosed in the original manifesto below (just scroll down).

Now & Again took place between October 21, 2005, and January 8th, 2006, at the Dutch Design Center Utrecht. Thanks to the curators for inviting us. 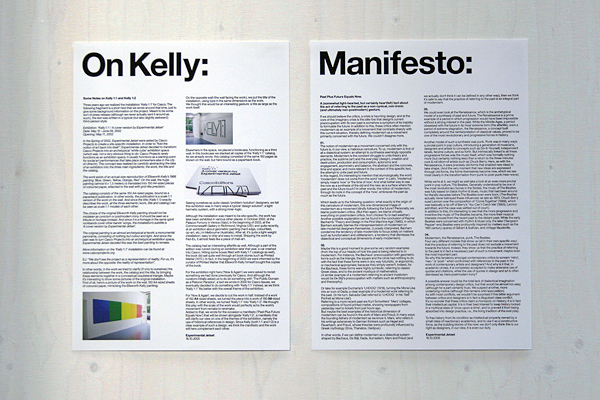 Title: Past Plus Future Equals Now.
(On the act of referring to the past as a modernist gesture)

If we should believe the critics, a crisis is haunting design, and at the core of this imaginary crisis is the idée-fixe that design's current preoccupation with its own past is somehow a symptom of its inability to formulate the future. In addition to this, these critics often mention modernism as an example of a movement that contrasts sharply with this current situation, thereby defining modernism as a movement primarily concerned with the future. We couldn't disagree more.

01.
The notion of modernism as a movement concerned only with the future is, in our view, a malicious caricature. To us, modernism is first of all a dialectical system: an attempt to synthesize seemingly opposite elements. Modernism is the constant struggle to unite theory and practice, the sublime (art) and the everyday (design), creation and destruction, production and consumption, autonomy and engagement, asymmetry and balance, the abstract and the concrete, time and space; and more relevant in the context of this specific text, the attempt to unite past and future.
In this regard, it's interesting to mention that etymologically, the word 'modernism' does not come from the word 'new': in Latin, 'modernus' simply means 'now' or 'the time of now'. And what better way to see the now as a synthesis of the old and the new, as a surface where the past and the future touch? In other words, the notion of modernism, through its roots in the concept of the 'now', embraces the past as much as the future.

Which leads us to the following question: what exactly is the origin of this caricature of modernism, this one-dimensional image of modernism as a movement blindly following the future? Personally, we blame postmodern critics. (But then again, we blame virtually everything on postmodern critics, from bad weather to bird flu).
Another possible explanation can be found in the conclusion of Rayner Banham's 'Theory and Design in the First Machine Age' (1960), in which Banham actually blames the misrepresentation of modernism on late-modernist designers themselves. (Loosely interpreted, in that chapter Banham criticizes the tendency of late-modernists to focus solely on matters such as functionalism and utilitarianism, a tendency that dismisses the dialectical and conceptual dimensions of early-modernism).

02.
Maybe this is a good moment to give some very random examples (off the top of our heads) of how the past is being referred to in modernism. For instance, the Bauhaus' preoccupation with geometric forms such as the triangle, the square and the circle had nothing to do with the fact that these forms were in any way futuristic, or ergonomic, or mechanical appropriate; because they simply weren't. Indeed, for the Bauhaus, these forms were highly symbolic, referring to classic Greek ideas, and to the ancient mystique of mathematics.
(A similar example of a modernism referring to ancient mysticism would be De Stijl's preoccupation with matters such as antroposophy and theosophy).
Or take for example Duchamp's 'LHOOQ' (1919), turning the Mona Lisa into an icon of Dada; a clear example of a modernist work referring to the past. (In his turn, Salvador Dali referred to 'LHOOQ' in his 'Self Portrait as Mona Lisa'). Referring to a more recent past are Kurt Schwitters' 'Merz' collages, compositions of found printed matter, showing newspapers from yesterday next to tickets from just hours ago.

But maybe the best examples of the historical dimension of modernism can be found in the work of Marx and Freud, in many ways the founding fathers of modernism as we know it. Marx, who refers in his writings extensively to German thinkers such as Hegel and Feuerbach, and Freud, whose theories were profoundly influenced by Greek mythology (Eros, Thanatos, Oedipus).

In other words, if we can define modernism as a dialectical system shaped by Bauhaus, De Stijl, Dada, Surrealism, Marx and Freud (and we actually don't think it can be defined in any other way), then we think it's safe to say that the practice of referring to the past is an integral part of modernism.

03.
We could even look at the Renaissance, which is the archetypical model of a synthesis of past and future. The Renaissance is a prime example of a period in which progression would have been impossible without a strong interest in the past. While the Middle Ages, a period obsessed with the future in its most extreme form (the afterlife), was a period of extreme stagnation, the Renaissance, a concept built completely around the reinterpretation of classical values, proved to be one of the most revolutionary and progressive forces in history.

Another model of such a synthesis was punk. Punk was in many ways a pivotal point in pop culture, introducing a generation of musicians, designers and artists to concepts such as Do-It-Yourself, independent labels, fanzine culture, and so forth. But intrinsically linked to all these progressive forces was the music itself, which was formally nothing more (but certainly nothing less) than a return to the three-minutes rock & roll idiom of artists such as Chuck Berry. Here, as with the Renaissance, it were precisely old forms that enabled new ideas to take shape. (And the very moment that new ideas are expressed through old forms, the forms themselves become new, which we see most clearly in the transformation from punk to post-punk/new-wave).

While we're at it, we might as well take a look at an even more pivotal point in pop culture, The Beatles. Generally understood to be one of the most revolutionary forces in the Sixties, the music of The Beatles was fully based on black rhythm & blues, music that had been around for literally decades before The Beatles even were born. (The Beatles actually never betrayed these influences: as late as 1973, Chuck Berry sued Lennon over the composition of 'Come Together' (1969), which was basically a rip-off of Berry's 'You Can't Catch Me' (1955). Lennon admitted, and the case was settled out of court).
In addition to this, it's interesting to see that the more progressive and inventive the music of The Beatles became, the more their musical interests moved from the recent past to the distant past. While the early Beatles were concerned with rhythm & blues only, the later ('Sergeant Pepper'-era) Beatles were profoundly inspired by matters such as the 19th century operas of Gilbert & Sullivan, and vintage Vaudeville.

04.
Modernism, the Renaissance, punk, The Beatles. Four very different models that show us (all in their own specific way) that the practice of referring to the past does not exclude a movement towards the future. Indeed, they show us that the practice of referring to the past is in fact a necessary part of such a movement; maybe even the most important part.
So why this tendency amongst contemporary critics to scream 'retro', 'neo-' or 'post-' when confronted with references to the past in the work of contemporary artists and designers? And why is it that, in academic writing, it is completely accepted to make extensive use of quotes and citations, while the use of quotes in design and art is often dismissed as mere postmodern irony?

A possible answer could be the total lack of dialectical imagination among contemporary design critics, but that would be almost too easy (although for a part certainly true). We suspect another, more underlying motive (although this remains wild speculation).
As with most conflicts, we wouldn't be surprised if this bitter argument between critics and designers is in fact a disguised class conflict. It's no wonder that these critics claim a monopoly on history; it is in fact their intellectual capital. It is in their best interest to keep history locked in a mythical state of 'once-upon-a-time', and to prevent it from being absorbed into design practice, i.e., the living tradition of the everyday.

To free history from its condition as intellectual property owned by a small class of reactionary academics, and to use it as a constructive force, as the building blocks of the now; we don't only think this is our right as designers, in our view, it is even our duty.

Afterword: a couple of months after it appeared in Now & Again, this manifesto was also published in Verso, the University of York's design magazine (thanks to Moiz Syed).