Note: Not to be confused with Blow-Up, the lecture we did in 2003, in Barcelona.

Most of the Helvetica-related projects we did around 2007 (see Helvetica / Hustwit, Helvetica / Kriterion and Helvetica / Blu-ray) were connected to Helvetica, the documentary directed by Gary Hustwit. The 'Fifty Years of Helvetica' project, however, was completely Hustwit-free.
In March 2007, we were approached by Mark Blamire (of Blanka), who asked us if we wanted to contribute to a poster exhibition celebrating fifty years of Helvetica. Basically, fifty designers were asked to create a poster, each of the fifty posters representing one particular year. In the words of Mark Blamire: "This is to celebrate the 50th Birthday of Helvetica / this will be an exhibition of 50 images by 50 designers / this will be a visual diary of the life-time of Helvetica / and what it has experienced over the last 50 years. As each artist agrees to contribute / they will be allocated a random year (from 1957-2007) / then each individual must represent something truly inspirational that happened within that year". In other words, each designer had to design a poster, 50 x 50 cm, representing one year in the lifetime of Helvetica (1957–2007). The year that was randomly allocated to us was 1966.

1966 is the year of Blow-Up, Antonioni's masterpiece, one of our favourite movies of all time. Our idea was quite simple: for the poster, we wanted to literally blow up a piece of printed matter. In the movie, it was a photograph that was blown up; for our poster, we wanted to blow up a poster. Our starting point was the actual film poster of Blow-Up; we wanted to enlarge a fragment of the poster, and keep enlarging it, until the CMYK grain would become visible, almost like a journey into the heart of printed matter. This is the poster we came up with: 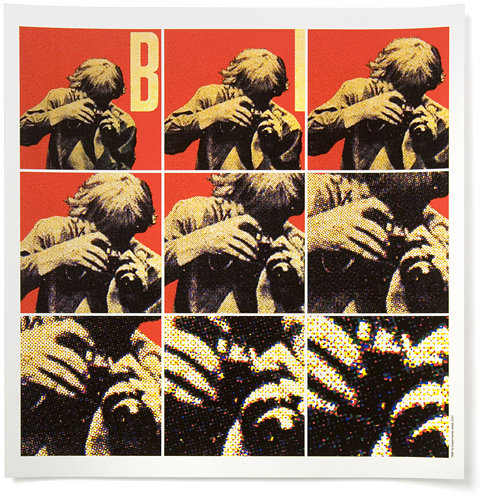 However, Mark Blamire was reluctant to accept this print into the exhibition. Apart from the showing the poster in an exhibition, he also wanted to sell prints through Blanka (his online poster store), and he was afraid our print would cause problems regarding copyright, as the film poster we used as our starting point was of course an already existing poster. Personally, we cannot really imagine that our print would have caused legal problems. But we respected Mark's view, and decided to come up with a new print. Shown below this new design. It's the same principle, but here the execution is completely typographical: 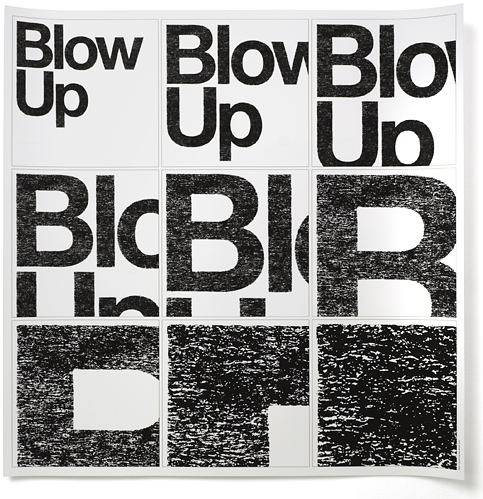 The actual exhibition took place at the Design Museum in London, from July 19 to September 2, 2007. After this, the exhibition actually toured quite a bit. So far, it has been shown in Leicester, New York, Sheffield, Newcastle, Paris, Dublin, Sao Paulo, Copenhagen and Edinburgh. Below an image of the Blow-Up poster as it appeared in an exhibition at The Lazy Dog, Paris: 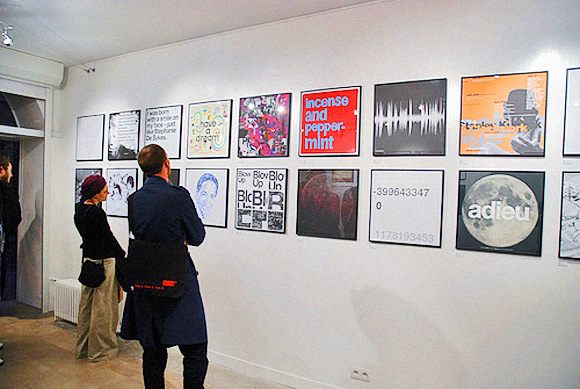 Two last notes. First of all, another print we designed for Blanka, in 2006, can be seen at Blanka / Structure. Secondly, in an interview we recently gave to weblog AisleOne, we explained in more detail our admiration for Blow-Up the movie; see AisleOne Intervista and scroll to the last question ("What is your your favorite movie?").