A year after we designed the Stellar System t-shirt for the Japanese GAS institute (publisher of magazines such as Gasbook and Atmosphere), we were approached to design another t-shirt for them. This time, GAS asked a group of designers and artists (among others Laurent Fetis, Reala, and us) to create a t-shirt based on a favourite song. We decided to design a shirt based on The Stranglers' hauntingly beautiful 'Golden Brown' (1981).

First, by changing just one letter, we turned the title into 'Gold on Brown'. Then, we printed this title on the shirt, in gold ink, on a brown shirt – literally 'gold on brown'. Thus, the shirt refers both to the song title and to (the shirt) itself. 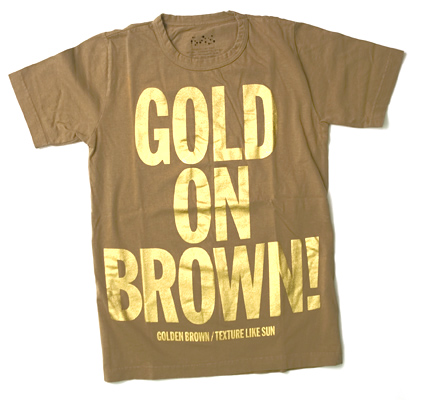 The exclamation mark (!) was added for purely formal reasons: in order to align the O's in a straight, vertical row, an extra character had to be added after the word 'BROWN'. It could have been any punctuation mark, but eventually we settled for the exclamation mark, to give the shirt a slogan-like subtext.