We kept the stationery quite basic: a letterhead, some business cards, an envelope and some sheets of address stickers. The stationery actually had to function for two different purposes: it had to be usable for both De Theatercompagnie (the theatre group itself) and Het Compagnietheater (the building the theatre group was situated in). So we made a logo in which these two words (De Theatercompagnie and Het Compagnietheater) overlap each other in the word 'Compagnie'. This overlapping manifested itself as a red/blue overprint. 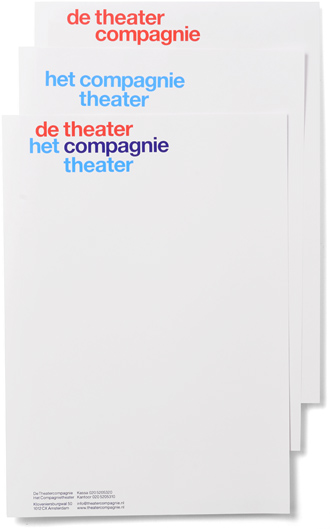 Shown below a selection of cards, front and back: 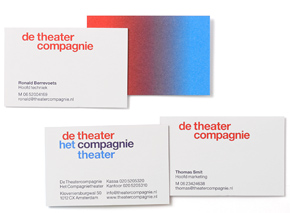 The envelope featured the red-blue gradient as well, printed on the inside. From the outside, this gradient was visible through the window of the envelope (shown below), and on the back of the flap. 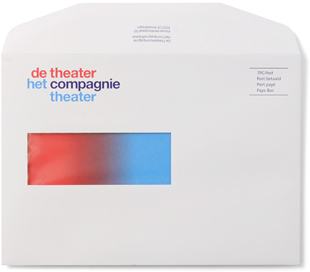 We designed the tickets for De Theatercompagnie as well:

Around the same time, we designed both the websites of De Theatercompagnie and Het Compagnietheater. We had to work with an already existing structure, which we completely cleaned up, and applied our own typography to. Shown below a couple of screenshots:

We quit working for De Theatercompagnie in the beginning of 2008 (the last play we designed was DTC / De Wilde Eend), and we know that since then the website of De Theatercompagnie underwent some changes. In other words, we aren't responsible for the site as it looks now.