In Februari 2003, we were visited by Eric van Eerdenburg, director of Lowlands Festival, who asked us to design a tent for the festival (or more precisely, to design a print for such a tent).

Lowlands is a huge alternative music event, an amazing rock festival that takes place in a number of large tents on a terrain the size of a small village. Because of their size, these tents reminded us of giant warships; an association that was only reinforced by the military-type names given to these tents: 'Alpha', 'Bravo', 'Charlie', etc.
Thinking about a print, we decided to design a pattern that was inspired by the phenomenon of 'Dazzle Ships' (or 'Razzle Dazzle'): an experimental form of camouflage painting used on warships during the first World War; disturbing Op-Art-like patterns that were used to confuse enemy ships. To see the first sketches we made, go to Dazzle Ship.

However, a short while after we designed those patterns (the patterns shown at Dazzle Ship), the plans changed drastically. Instead of a festival tent, we were now suddenly asked to design a light tower. We actually liked this plan even better; for the tent, we were only allowed to design the front, while for the tower, we needed to design all four sides. This surely sounded more attractive to us.
So we really loved the idea of doing a tower, and changed the title of the project from 'Dazzle Ship' to 'Dazzle Rocket' (a more interesting title as well).

Shown above (at the top of the page) a revolving image of the tower, a simulation we designed to present the idea to Eric van Eerdenburg. Apart from countless technical sketches, we also created a large amount of maquettes, little cardboard scale models. Shown below three of these maquettes: two models representing the Dazzle Rocket idea, and one older model showing the Dazzle Ship idea. 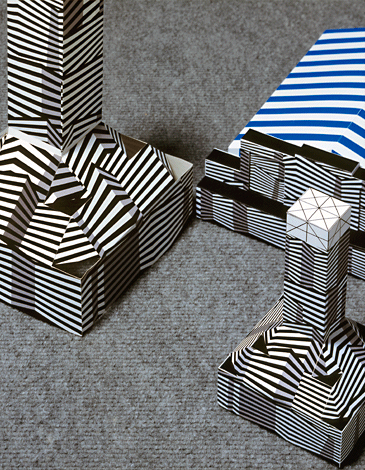 (These maquettes, created in 2003, were actually photographed by Johannes Schwartz for a photography project we did together in 2005; see Scale Models).

Everybody was enthusiastic, the Dazzle Rocket structure was quickly approved, and ready to be technically executed, when suddenly the whole project was called off. Because of disappointing ticket sales (for the first time in its ten year existence, the festival wasn't sold out), the festival was stripped of all art- and design-related projects.
We were being told that the project was shelved until the next year, 2004. However, we never heard from it again, and we simply assumed the project was completely cancelled. Until, in the beginning of 2007, four years after the start of the project, we suddenly received a phone call, telling us that the project would continue after all. And so, in the summer of 2007, the project was finally executed. Go to Dazzle Rocket 2 to see actual images.