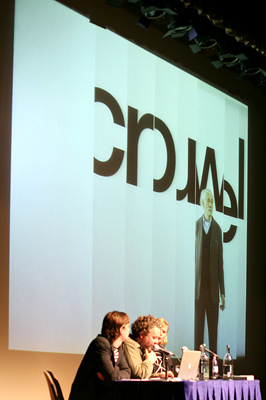 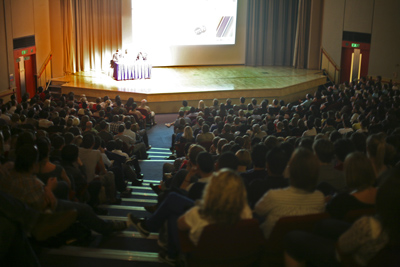 Thursday 5 June, 2008. That's us three, giving a lecture at a sold-out Logan Hall (London), in front of over a thousand people. A terrifying experience, but we think we did okay; we were very nervous before we started, but afterwards we felt happy and relieved, and the reactions were quite good. A couple of days later, someone pointed us to some sobering online reviews ("Nice work, but possibly the most boring people ever"), but hey, tell us something we don't know.

Thanks to Simon Waterfall, Anna Bailey and the rest of the D&AD crew, for inviting us and organizing our stay.

A full transcript of the lecture will follow later. In the meantime, here's an interview that appeared in Ampersand (the magazine of D&AD) to announce our lecture. Questions by Lakshmi Bhaskaran, answers by us:

2. Describe what you do for a living?
Turning language into objects.

3. If you weren't doing this, what would you be?
Honestly, we have no idea. Besides the fact that we have we no expertise other than graphic design, it would also be impossible for us to function without each other.

4. What person/piece of work has inspired you most?
The sleeve of the Beatles album commonly known as the White Album, designed by Richard Hamilton. It's a mass-produced art object, a pop-cultural monochrome multiple. We like the paradoxical quality of that.

5. What has been your favourite project to date and why?
The graphic identity and sign system that we designed in 2004 for SMCS (Stedelijk Museum CS). We loved the fact that we could contribute something very concrete to Amsterdam, the city where we live and work. It was like giving something back to the environment that gave so much to us.

6. How would you define an idea?
Something that has no form (yet).

7. What are you working on at the moment?
Among other things, the graphic identity and sign system of 104 (Le Cent Quatre), a French cultural institute that will open its doors later this year.

8. Tell us a secret about yourself?
We are quite telephonophobic. We really dislike receiving or making phone calls. We try to handle everything through e-mail.

9. What is your favourite thing about London?
We love the Barbican. It's such a beautiful building. We also really like a lot of South Bank architecture.
And then there's that vegetarian Indian restaurant on Drummond Street that we try to visit every time we're in London.