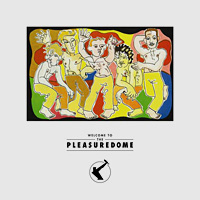 For the July issue (number 119) of U.K. magazine Grafik (formerly known as Graphics International) we were asked to write a 500-word text on a designer or artist who influenced us. Since we couldn't really pick a person, we decided to write an article about an influential design instead: the sleeve of Frankie Goes To Hollywood's 'Welcome To The Pleasuredome' (1984). The full text follows below.

(For all clarity: the image we show in this article isn't this designed by us. It is a design that we selected because we consider it to be an influence on us).

Frankie Goes To Hollywood's 'Welcome To The Pleasuredome' came out in 1984, when we were still in our (very) early teens. This double album had quite an impact on the three of us, both musically and visually. So instead of honouring an influential designer, we would like to honour an influential design: the record sleeve of 'Welcome To The Pleasuredome'. (And here we specifically mean the original version, the sleeve with the illustration on the cover; not the one with the band photo on the front).

First of all, let's consider the music. Although, around that time, we like to believe we were rather interested in bands more obscure than the mainstream phenomenon of FGTH, it's hard to argue with the sound of Frankie. Trevor Horn, the producer behind FGTH, was without doubt the Phil Spector of the Eighties. Where Phil Spector created his 'Wall of Sound', Trevor Horn created his own Chinese wall with FGTH. Overproduction as a fine art. From his first project (The Buggles' 'Video Killed The Radio Star') to his latest (the production of 'Dear Catastrophy Waitress', the recent album by Belle & Sebastian) Trevor Horn remains an immensely interesting person. Which brings us to the design of the sleeve of 'Welcome...'.
Although the credits for design are shared with a company called XL, it's clear the mastermind behind the design was Trevor Horn himself [editorial note: see afterword at the end]. The artwork is loaded with texts, quotes, dialogues and citations, referring to persons as diverse as Dostoievsky, Kierkegaard, Nietzsche, Kurt Weill, Virginia Woolf... the list goes on and on. A goldmine for the unsuspecting but eager-to-learn teenagers we were around then. It would take a complete essay to fully explore the sleeve. For now, we hope some random notes and incomplete observations (in no particular order) will do:

01.
Let's start with the name of the record company, ZTT, which happens to be Trevor Horn's own label. ZTT stands for Zang Tumb Tumb, named after the 1912 book by Italian Futurist F.T. Marinetti. (The words "Zang Tumb Tumb" are actually phonetic descriptions of the sound of bombs: Marinetti was, after all, a pro-war fascist). In addition to the name of his label, Trevor Horn referred to Futurism again with his project The Art Of Noise, named after the 1913 manifesto by the Futurist composer Luigi Rossoli. (Another English record company referring to a Futurist art movement would be mid-eighties noise label Blast First, named after the fabulous Blast/Bless manifestoes by Vorticist poet Wyndham Lewis).

02.
'Welcome To The Pleasuredome' is a double album, and there are some interesting things to say about the mechanics of gatefold sleeves in general. There is a certain sensation involved when opening, and closing, a double album. It's the sensation of 'dividing one into two', and 'fusing two into one'. From singularity to duality and back again; the material dialectics of the gatefold sleeve.

03.
The illustrations on the cover of 'Welcome...' are made by Lawrence Cole (now working under the name Lo Cole), and at first sight appear to be drawn in the style of Picasso. Closer examination learns that the drawings are more likely to refer to the homo-erotic drawings of Jean Cocteau. Still, to our personal taste, what is happening on the inner-sleeves is slightly more intriguing:

04.
Take for example the merchandise section: pictures of Paul Rutherford (the band member with the moustache) and Claudia Breucken (from the German ZTT band Propaganda) modelling shirts, sweaters, bags and even socks bearing FGTH artwork. Products that could be ordered by using the coupon strategically placed on the die-cut hole on the sleeve; a brilliant design solution. By naming the products after artists (for example, 'the Hugo Ball t-shirt', 'the Charles Baudelaire sweat shirt', etc.) this merchandise section is an example of commodification in its purest form, while at the same time critiquing this commodification. A disturbing concept, here brilliantly executed.

We could go on and on about this sleeve, as it is such a rich subject. But let's get to the heart to the matter: how exactly did it influence us? Looking back, we think the sleeve showed us for the first time that pop-culture and theoretical/political concepts weren't completely different spheres: they could, and should, be synthesized.
The pursuit of this synthesis is in a way typically English. People like Trevor Horn, Malcolm McLaren, Tony Wilson (Factory Records), Bill Drummond (KLF) are prime examples of people exploring this specific brand of 'politicized aesthetics'. What these people are doing has a lot to do with what Adorno in 'Minima Moralia' critically describes as the English 'formalization of life': "Culture is not maintained there [in England, ed.] as a separate sphere of the objective mind, as dabbling in art or philosophy, but as a form of empirical existence".
Adorno might be critical, and a lot of people might find bands such as FGTH utterly pretentious; but the fact remains that Trevor Horn opened our eyes to a world full of possibilities. So next time you're annoyed when we mention Hegel to explain a t-shirt print we designed, or when we cite Marcuse to justify our tendency to overuse a specific typeface, don't blame us. Blame Trevor.

After the publication of this text in Grafik 119, we received quite some mails from people pointing out that it wasn't Trevor Horn, but Paul Morley (Trevor Horn's partner in ZTT), who was responsible for the quotes on the sleeve. We were accused of not having done our research very well, and we plead guilty: we didn't do any research at all. The idea of Trevor Horn as the mastermind behind it all was most of all product of our childhood memories.
But in all fairness, it doesn't really make a big difference for the article, as it was a tribute to a sleeve rather than a text about a particular person. Looking at it objectively, there's only one sentence wrong; instead of "it's clear the mastermind behind the design was Trevor Horn himself" it should have read "it's clear the mastermind behind the design was Trevor Horn's partner, Paul Morley". But we realise that's a feeble excuse. We stand corrected.