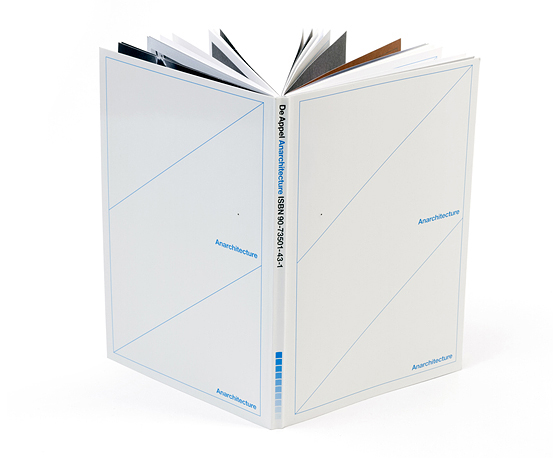 ‘Anarchitecture’ was a group exhibition that took place at Amsterdam art space De Appel, at that time still located at de Nieuwe Spiegelstraat, and headed by Saskia Bos (and not to be confused with De Appel, the theatre in The Hague). In short, the participants of De Appel’s annual Curatorial Training Program (at that time consisting of Lorenzo Benedetti, Anja Dorn, Machiko Harada, Rob Tufnell and Suzanne van de Ven) were asked to curate this group show, and approached us to design the accompanying catalogue, invitation and poster.

When we talked with the curators about a possible catalogue, we sensed that they were expecting a very traditional publication – each artist his/her own spread, showing reproductions of artworks. Thinking about the theme of the show (‘anarchitecture’, which can be read as a ‘portmanteaux’ of anarchy and architecture), we quickly realized such a traditional approach would not be sufficient. So we proposed, to the curators, a catalogue that would really follow the theme of the exhibition. The question we asked ourselves: why not see the book as a space in itself, and let the artists perform interventions in this book, as if it was an actual exhibition space?

We started by producing a print run of empty books – so-called ‘dummies’. These dummies were blank, except for a grid that was printed on each page. We figured that, by providing a grid, we would give the artists something to work with, something to push against. (We printed this grid in blue, to refer to the classic notion of the architectural blueprint). This is what the dummies looked like: 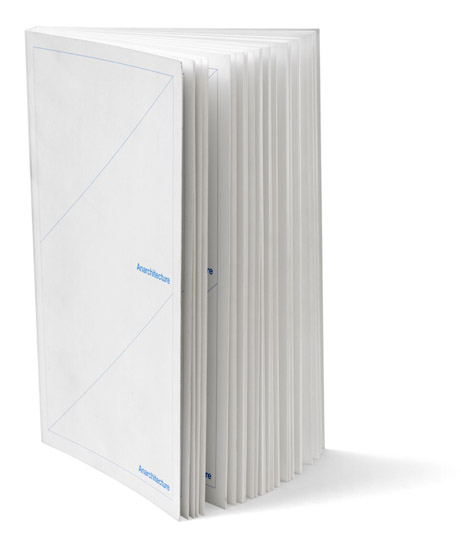 We then sent these dummies to the artists, asking them to do interventions to the book, and then send the book back to us. The basic idea was that we would then collect all these interventions, and put them together in one book; and that resulting book would then be the catalogue.

It was surprising to see the results. Although some of the artists just fell back to the traditional idea of a catalogue (glueing reproductions of their work neatly next to each other, as instructions for a clean spread), other artists did try to come up with actual material interventions. Our favourite intervention was probably by Gert Robijns, who proposed to drill a hole straight through the book: 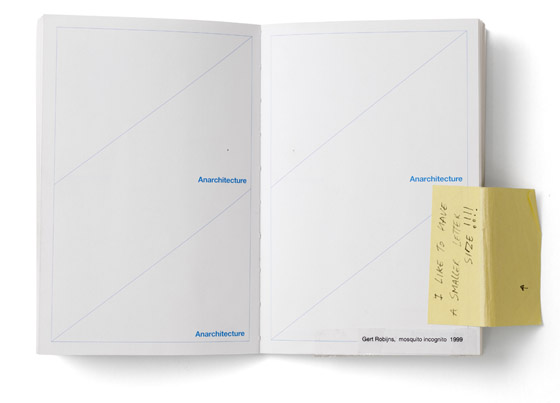 At that time, we are quite pre-occupied with perforating printed matter ourselves (we already designed the perforated W139 invitations, and the Paradiso posters with the holes), so Robijns’ intervention fitted right in.

Another artist proposed to cut out a page (Gregor Schneider), another one wanted to stick a different photograph between each page (Frans Jacobi), and Stefania Galegati wanted to insert a piece of photo-sensitive paper. And then there were also a couple of artists who created actual sculptural artworks based on the dummy. Mark Bain for example, who created this vibrating booklet, shown here as we used it in the printed catalogue: 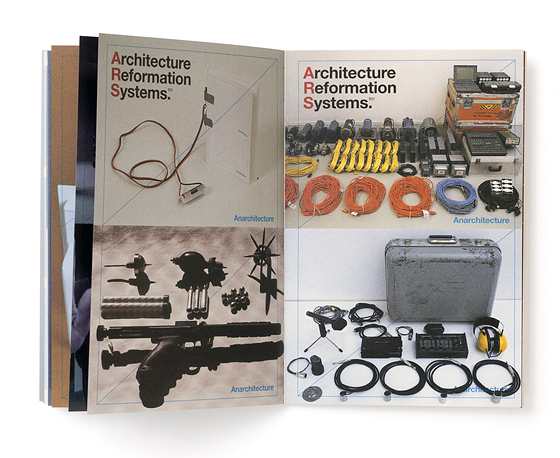 Paolo Zuffi created a small window, in the exact proportions of the dummy:

And finally, Thoroddur Bjarnason stuck another book in the dummy, in such a way that the publications could not be separated from each other: 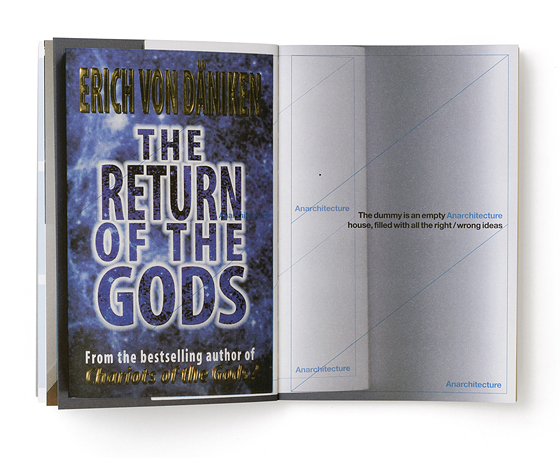 While working on the book, the budget was cut dramatically and unexpectedly – so we had to streamline some of the ideas, to make the book cheaper to produce. For example, instead of sticking a photograph between each page (as Frans Jacobi proposed), we decided to put all his photographs together on one single card (as a ‘photo-index’), and insert this card in the catalogue, as a separate sheet. There were actually a couple of pragmatic compromises like that.

Also, because of the budget cuts, we had to include a couple of adverts in the back of the catalogue; but more importantly, the book also had to become much thinner than we anticipated. Added to that, to cut costs, we had to recreate all the interventions ourselves, by hand. (For example, we ended up drilling all the holes ourselves).

Shown below a couple of spreads of the book as it was eventually printed (A5-sized, 80 pages, offset-printed by Drukkerij Rob Stolk): 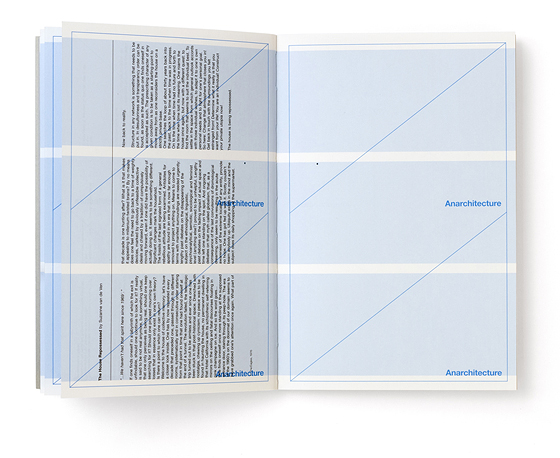 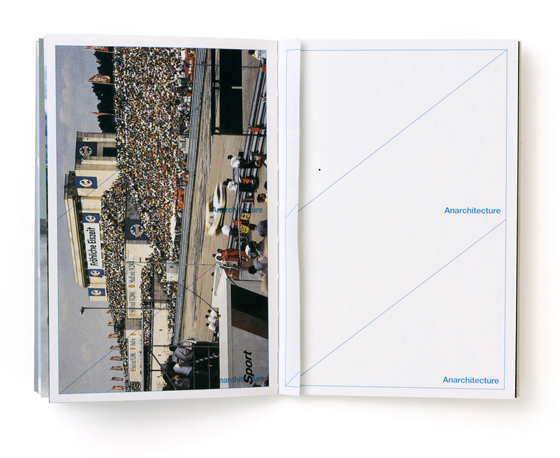 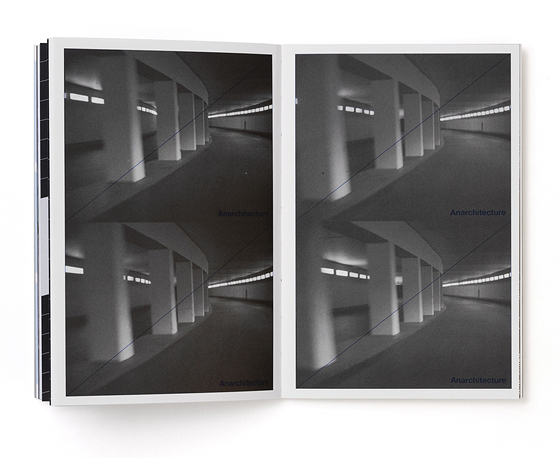 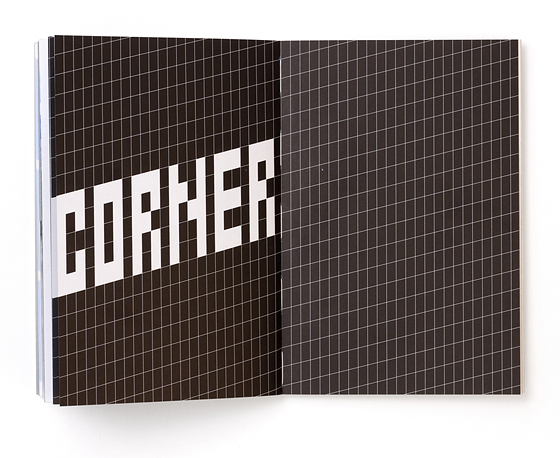 We have to say that some of these interventions worked really great with each other. For example, Gert Robijns’ hole turned the book almost in a pinhole camera, strongly affecting Stefanie Galegati’s inserted sheet of photo-sensitive paper: 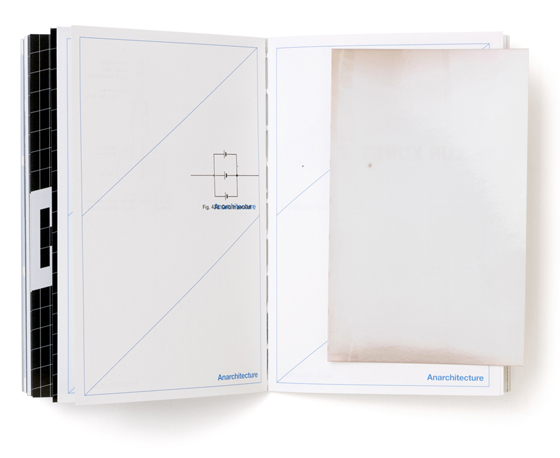 We had some intense discussions with the curators, regarding the catalogue. They were quite shocked to learn that we intended to keep the grid in the book, and to just print the photographs on top of it, so that the grid would be visible throughout. The way we reasoned, the grid was part of the structure of the book – if the artists would have wanted to get rid of the grid, they should have come up with an intervention that would have erased the grid (for example, Gregor Schneider’s cut-out page).

This discussion also revealed some essential differences in opinion between us and the curators, on the nature of reproduction. In general, we feel that a reproduction of an artwork should never be mistaken for the artwork itself – and that’s why we usually feel it’s important to add, to the reproduction, some sort of ‘Brechtian’ layer (for example, through the use of overprint, folding or perforation), in order to make the viewer aware that they are looking at ‘just’ a printed reproduction.

We still remember those long talks (heated arguments, really) between us and the curators, taking place at the kitchen table (we were still working from Marieke’s living room back then). Anyway, for some reason, we actually managed to convince the curators. We were a stubborn bunch back then.

As we’re writing this, we suddenly remember that we added one extra intervention to the book ourselves. On the inside of the spine (the side of the spine to which the pages are glued) we printed a sort of a secret message. It can only be read when the book is destroyed. Another example of graphic anarchitecture.

The book was published in 1999, and we just found out it can still be ordered through the website of De Appel.

Having said that, here’s the poster we designed for the exhibition. It’s a A0-sized sheet (screenprinted by Wyber Zeefdruk, at that time still working under the name Henderson/Wyber), displaying a Tetris-like composition of collapsing bricks (‘einstürzende neubauten’, so to speak), with the title ‘Anarchitecture’ printed on top of it, upside-down: 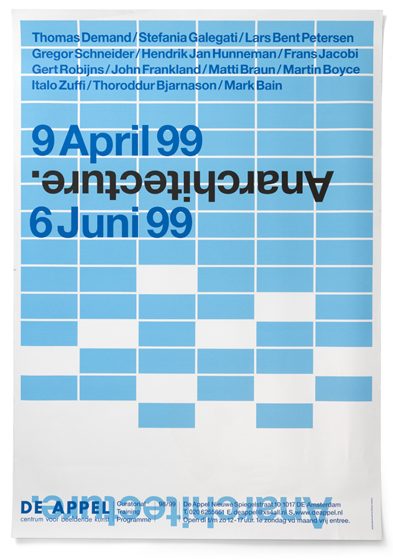 The invitation just followed the composition of the poster. An A6-sized card, printed on both sides (offset-printed by Drukkerij Rob Stolk), displaying again this Tetris-like grid, together with the upside-down title: 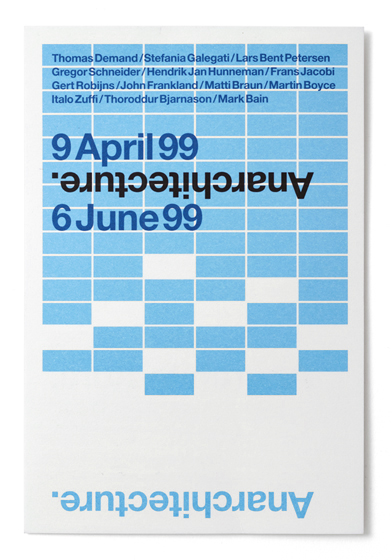 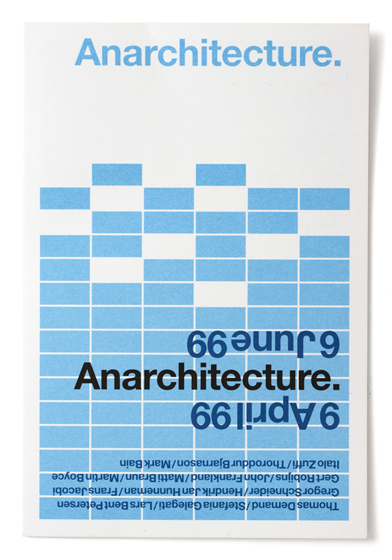 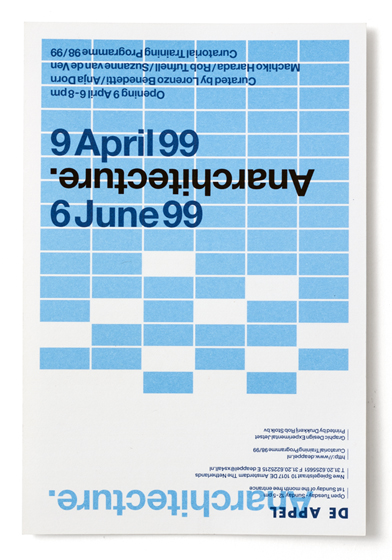 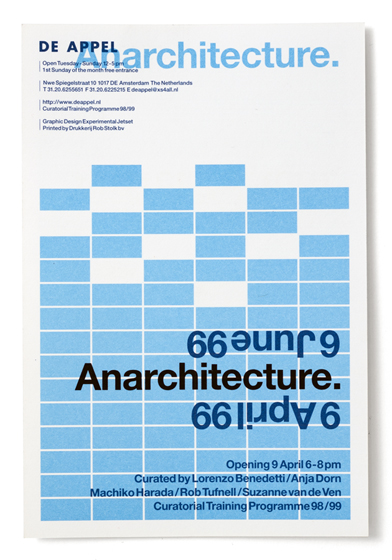 Apart from the poster and the invitation, we also designed a lot of adverts (for magazines such as Frieze, Flash Art, etc.). Going through our old Anarchitecture files, we also came across a lot of little Flash movies we made, featuring the collapsing Tetris-pattern. We can’t seem to remember anymore why we produced these animations – maybe they were shown as ‘intermission movies’, during some film-program related to the exhibition? We really can’t remember anymore.

Thanks to the Curatorial Training Program 98/99 (Lorenzo Benedetti, Anja Dorn, Machiko Harada, Rob Tufnell and Suzanne van de Ven) for asking us to take part in this project.