'Public Address System' was the name of a group exhibition that took place between 9 January and 14 February 2004, at the Henry Peacock Gallery (London). For this exhibition, the curator (Angharad Lewis) asked 40 graphic designers to create a typographic A2 poster. There was one catch: the poster had to be an interpretation of a speech. 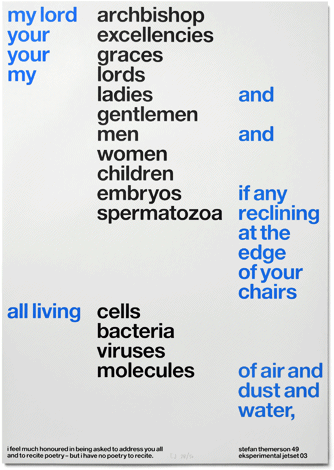 When thinking about what we should do for our poster, we remembered that a few months earlier we were at a screening of an old Dutch television documentary from the seventies, entitled 'Stefan Themerson en de Taal' (Stefan Themerson on Language). In one of the scenes, the Polish-born writer, film maker, publisher and poet Stefan Themerson (1910–1988) is shown reciting a paragraph from his novel 'Bayamus and the Theatre of Semantic Poetry' (1949):

"My lord archbishop; your excellencies, your graces; my lords, ladies and gentlemen, men and women, children; embryos, if any; spermatozoa reclining at the edge of your chairs; all living cells; bacteria; viruses; molecules of air, and dust, and water... I feel much honoured in being asked to address you all, and to recite poetry – but I have no poetry to recite."

A beautiful, anticlimactic speech. And also a speech that could serve as a sort of introduction to all the other speeches in the exhibition.

For our poster, we treated this speech in a somewhat analytical manner; by listing the addressees in a vertical way, we tried to emphasise the strong hierarchical logic behind the text.

The poster was published in a limited edition of 50 copies, signed and numbered.