We were asked by the Dutch Telecommunication Group (KPN) to design a series of three telephone cards celebrating the 150th anniversary of KNMI (Dutch Meteorological Institute). There were already three Dutch poets selected by the KPN; each poet had to write one line of poetry. Our task was to come up with three designs, employing these lines.

The moment you put an image next to a sentence, the sentence becomes a caption, and we didn't want that; we really wanted to put the sentence itself on the foreground. So our main challenge was to link these sentences to the weather without becoming too illustrative. To formulate it differently, we wanted to translate these poems in a meteorological way. And while we were searching for a way how to do that, one question kept popping up in our mind: how to measure the temperature of a word? In the same way scientists are measuring something as seemingly unpredictable as the weather, we wanted to try to 'objectively' measure something as seemingly subjective as poetry.

After a lot of phone calls we finally found a scientific laboratory that wanted to cooperate. We went to the lab, and recited the poems while holding a high-sensitive thermometer to our mouths, measuring the temperature of our breath as it came out. We even recited one of the sentences while holding a 'spirometer' to our mouths, to measure the wind-force of our breath. We really liked the idea of speaking these sentences out loud. As telephone cards are about speaking, this oral element made sense.The goal of these experiments was to explore the possibility of treating something as immaterial as a line of poetry as a very physical object; as something that actually could be measured. We wanted to turn poetry into a concrete entity. In that sense, we were quite inspired by the English/Polish writer Stefan Themerson (1910–1988), and his concept of 'semantic poetry'. Using the data we got from our experiments, we turned the telephone cards into weather charts, trying to bring all the elements (the weather, the poetry, and the function of a telephone card) together.

The laboratory where the measuring took place was part of the Amstel Institute, located at Science Park, Amsterdam.

The cards measure 85 x 52 mm each, and were widely available in most Dutch supermarkets, kiosks and tobacco shops. (We designed the cards in 2003, but because of the long production time, they came out in 2004; that's why we put them in the 2004 section). 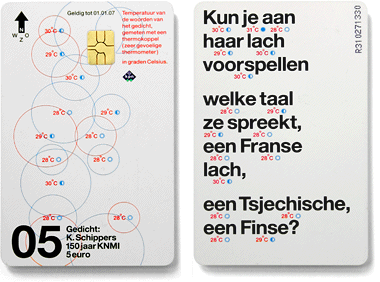 Shown above the first card (front and back), featuring a line written by K. Schippers (which is a pseudonym for for Gerard Stigter, born 1936). Schippers is actually quite an interesting figure: he wrote a standard book on dadaism in the Netherlands, entitled 'Holland Dada' (1974). Of all three texts, Schippers' line is least about weather; it's actually more about predicting in general, and voice in particular. Roughly translated, the sentence reads:

"Can you predict from her laugh
which language she speaks,
a French laugh, a Czech one,
a Finnish one?"

We measured the temperature of these words (in degree Celsius). Little icons of the sun, placed underneath the words, indicate the intensity of temperature. 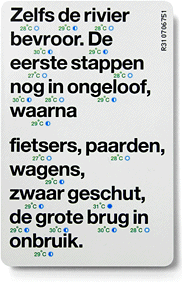 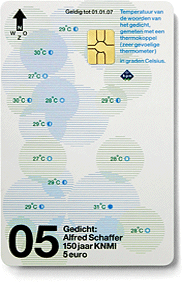 Shown above the second card (front and back), displaying a one-line poem by Alfred Schaffer (born 1973). Roughly translated, it reads:

"Even the river froze.
The first steps still in disbelief,
after which bikes, horses, wagons,
artillery; the large bridge into disuse." 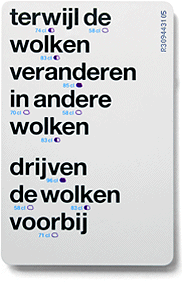 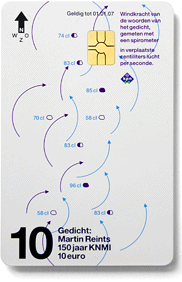 Finally the third card (front and back), showing a text by Martin Reints (born 1950). Roughly translated, it reads:

"while the clouds
change into other clouds
the clouds drift by"

While the other two cards are worth 5 euros each, the value of this card is actually 10 euros. To indicate this change in value, we slightly shifted the concept. Instead of the temperature, we measured (for this card) the 'wind-force' of the words, in shifted centiliters breath per second. Underneath the words, we put little icons of clouds.

We must have some images of us doing the experiments in the laboratory, but we can't seem to find them right now. So for now, we can only give you the following picture, taken from the website of the KNMI. Shown below is John Bernard, a famous Dutch weatherman, officially launching the telephone cards by listening to the poems through the telephone. In the back you can see our cards. This whole performance took place at Museon, the Dutch national science museum (The Hague).
Sadly, we weren't present at this presentation; around the time of this launch party, we were working day and night on the graphic identity of the Stedelijk Museum CS (SMCS).

Thanks to Daniela Petovic (KPN) for inviting us for this project.

prev: Pop On Pop Off