Before we explain that, let us first sketch the situation. Around that time, we were designing mainly flyers, while we were in fact much more interested in designing posters (to read more about this, see Paradiso / Posters 1 and scroll to the last paragraph).
So our idea was quite simply to come up with a series of flyers in the format of posters. We wanted to design posters, and disguise them as flyers.

The flyer we had in mind was an A2-sized sheet, folded into a flyer of 20 x 10.5 cm. To make this cost-effective (posters are more expensive than flyers), we had to combine two different events on one flyer. We solved this by printing the poster on both sides, each side announcing a different event.

Shown below an example. What you see are two sides of the same poster (size A2). In other words, on the frontside it says ‘New Year Eve 98/99’, while on the back it says ‘Rick White’: 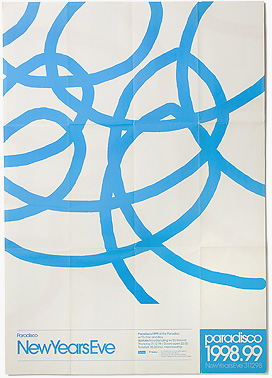 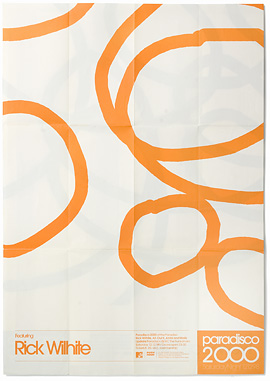 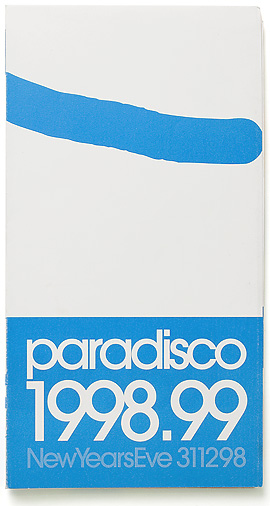 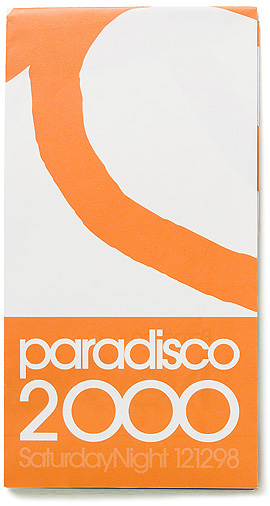 Extra copies of the posters were printed, and left unfolded, to be used as posters.

It was in fact a short-lived series, as ‘Paradisco 2000’ changed its name to ‘Paradisco 3000’ in 1999, and we quit working for Paradiso around that same time. So we actually designed only two of these double-sided posters, which translates into four flyers, for four events, all taking place in 1998.

It’s funny, in a lot of instances it is assumed that the Paradisco 2000 posters were actually designed in 2000 (for example, in the book ‘Paradiso Posters 1968-2008’ the posters are mistakenly filed under that year) while they were in fact all designed in 1998, when the notion of 2000 apparently still looked very far away, and wildly exotic. Don’t blame us for it though; we didn’t invent the name, we just made the posters. Or flyers.