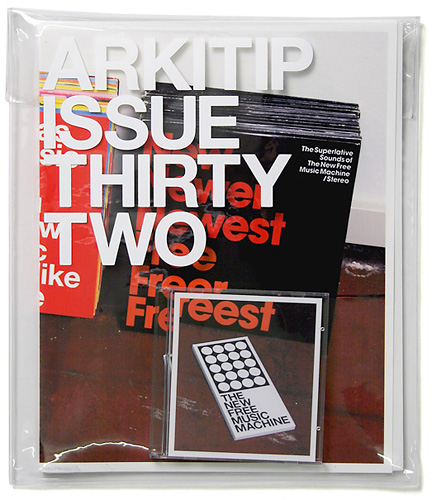 Almost a decade ago, we had on our website a feature called the 'vibraphone'. The vibraphone was a very simple musical instrument, designed by us around 1999; a small interactive Flash movie that could be used to generate long, free-floating vibrating tones. The visitors of our site really loved this instrument, and some bands (The Molecules, The Telescopes) even used this instrument on their records. However, a few years ago, when we redesigned our website, we removed the vibraphone; for some reason, we couldn't really find a fitting place for it.

In August 2005, we were approached by Los Angeles art magazine Arkitip to create a contribution for issue 32. Basically, they invited us to design three things: a small item to be enclosed with the magazine, a nine-page contribution that would appear in the magazine, and the cover of the magazine. Thinking about a good subject for this contribution, we decided to bring the vibraphone back to life.

Our secret hope was to turn the vibraphone into an actual hand-held device/console, like a small musical instrument. But obviously, this wasn't really possible, technically and financially speaking. So we settled for the second-best solution: we put the software on a 3-inch CD-rom, to be distributed with the magazine.
We redesigned the virtual vibraphone a little bit, and renamed it the 'New Free Music Machine', a reference to the 'Free Music Machine', an obscure electronic instrument from 1948, invented by composer Percy Grainger (1882 – 1961).

As we already wrote, we were also asked to design a nine-page contribution. For this, we designed a series of nine fictional record sleeves. Sleeves that looked as if they were designed for records featuring the New Free Music Machine. For this idea, we were very much inspired by 'Moog records' that came out in the 60s and 70s, novelty records featuring the Moog organ, bearing titles such as 'Switched-on Bach' (1968), 'Music To Moog By' (1969), and 'Moogie Woogie' (1969). We loved this concept, of novelty-instrument-themed records, so we decided to also apply it to the New Free Music Machine.
We designed nine fictional record sleeves, and turned them into actual cardboard objects. We then photographed these nine sleeves, and divided the photographs over nine pages, one sleeve per page.

The nine sleeves can be seen below: 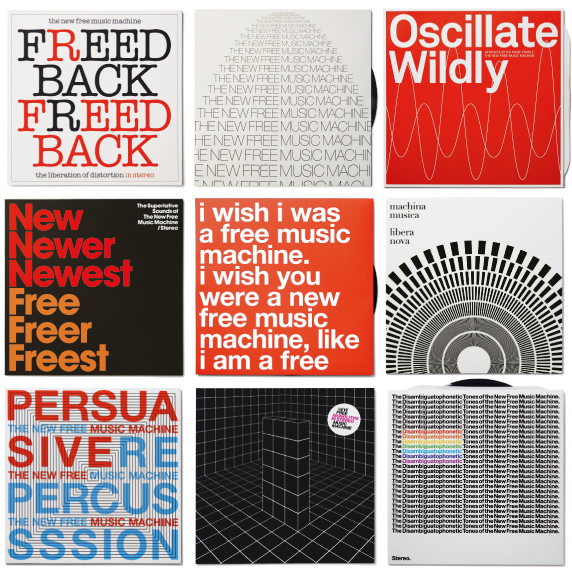 On the cover, we placed another image of these sleeves, now photographed 'in situ' in our studio. We also placed, in the picture, a model of the New Free Music Machine as we originally envisioned it: as a small hand-held musical console, almost like a pocket calculator.
Shown below the photo of the sleeves in our studio (the photo we actually ended up using for the cover was slightly different; on that photo, the NFMM model was lying on the ground instead of standing against the records): 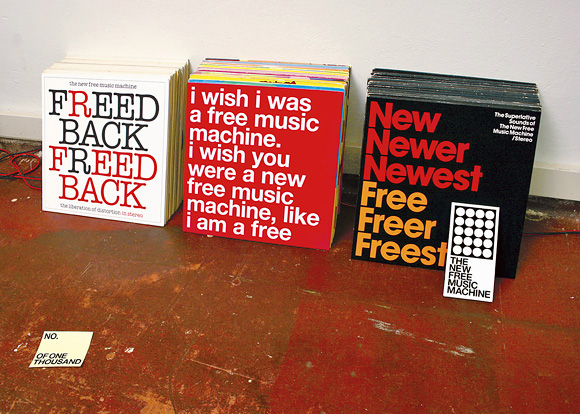 On the left hand bottom of the picture, you can see a Post-it note on the floor, saying "Number...of one thousand". We put this in the picture, so that it would end up on the back on the magazine. We needed a blank spot to number the magazine (the magazine came out in a numbered edition of 1000).

So how did all these elements finally come together? Well, the first image shows the finished publication. What you see is a 8x10'' magazine, packaged in a clear plastic bag. (The phrase "Arkitip Issue Thirty-Two" is screenprinted on the bag, not on the magazine). The little square in front of the magazine is in fact the 3-inch CD-rom, packaged in a mini jewelcase. (As image on the jewelcase, we chose to use a detail from the magazine cover, so that the case was visually integrated in the cover image).

In the future, we'll photograph all elements more precisely, front- back- and inside; but for now, we hope this picture will do.

Thanks to Scott A. Sant’Angelo of Arkitip for inviting us, and to Yoshi Kawasaki for the 2K/Gingham sponsoring.