Towards the end of 2006, artist Miltos Manetas asked us to design the invitation of The Internet Paintings, a show that would take place in January/February 2007 at the Blow de la Barra Gallery, London.

The Internet Paintings is a series of canvasses, 250 x 380 cm each, that Miltos started in 2000. These panels show painted collages of webpages, images found on the internet. In the words of Miltos, "as these websites are always appearing, changing and disappearing, the surface of the paintings also evolves. The Internet Paintings are infinite paintings".
Thinking about the idea of 'infinite paintings' we designed a poster that featured the phrase 'Internet Paintings', repeated without beginning or end, like a continuous scroll.
The poster (size A2) came out in two versions. A blue version, printed on thick paper, to be sold during the exhibition. And a red version, printed on thin paper, to be folded to a A5-format, and sent around as invitation. Shown below the two versions: 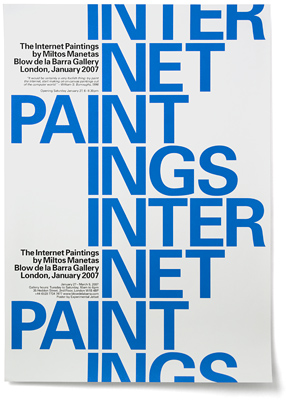 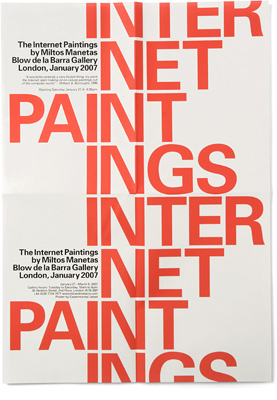 It's interesting; when the A2-sized poster was folded to an A5-sized invitation (as happened with the red version), the phrase 'in pain' appeared. We never intended this effect; we noticed it only after it was printed. Maybe our subconsciousness was sending secret messages to us? Anyway, here's a picture of the poster folded as an invitation: 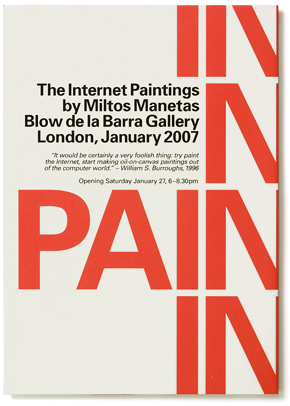 The quote by William Burroughs that is featured on the poster ("It certainly would be a very foolish thing to do: to try to paint the internet, to start making oil-on-canvas paintings of the computer world") is in fact a false quote, a fabrication by Miltos Manetas, typical of the way he works.

Anyway, after the exhibition, the whole series of Internet Paintings was actually bought by the Saatchi collection, in May 2007.
Looking at the paintings online, on the website of the Saatchi Gallery, we noticed that one of the paintings actually features a small detail taken from the Experimental Jetset website. Just look at the picture below: on the right side of the painting, in the middle, you can see a blurred image of the invitation we made for '20/20 Vision', an exhibition that took place in 2004 at the SMCS. Just a funny detail. 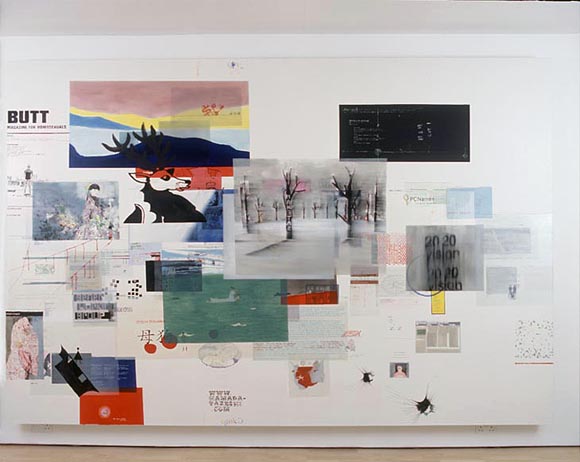