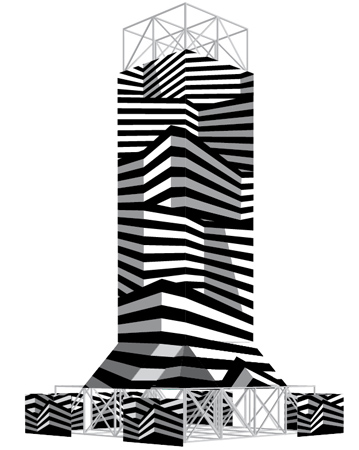 In Februari 2003, we were visited by Eric van Eerdenburg, director of Lowlands Festival, who asked us to design a tent for the festival (or more precisely, to design a print for such a tent).

Lowlands is a huge alternative music event, an amazing rock festival that takes place in a number of large tents on a terrain the size of a small village. Because of their size, these tents reminded us of giant warships; an association that was only reinforced by the military-type NATO names given to these tents: 'Alpha', 'Bravo', 'Charlie', etc.
Thinking about a print, we decided to design a pattern that was inspired by the phenomenon of 'Dazzle Ships' (or 'Razzle Dazzle'): an experimental form of camouflage painting used on warships during the first World War, in fact disturbing Op-Art-like patterns that were used to confuse enemy ships. To see the sketches we made in 2003, go to Dazzle Ship and Dazzle Rocket 1.

Everybody was enthusiastic, the Dazzle Rocket structure was approved, and everything was ready to be technically executed, when suddenly the whole project was called off. Because of disappointing ticket sales (for the first time in its ten year existence, the festival wasn't sold out), the festival was stripped of all art- and design-related projects.
We were being told that the project was shelved until the next year, 2004. However, we never heard from it again, and we simply assumed the project was completely cancelled. Until, in the beginning of 2007, four years after the start of the project, we suddenly received a phone call, telling us that the project would continue after all. And so, in the summer of 2007, the project was finally executed.

Shown above one of the technical drawings that we made. And shown below photographs of the finished light tower, as it was standing in the middle of the festival terrain, during Lowlands 2007. The tower is 16 meters high, and has a base of 8 meters wide. 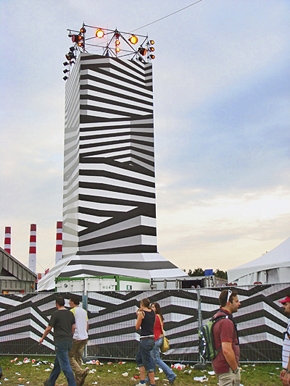 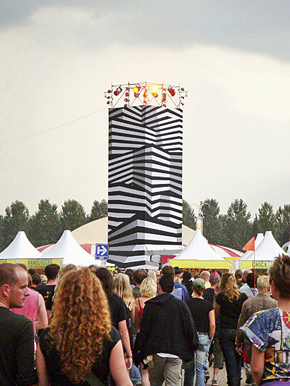 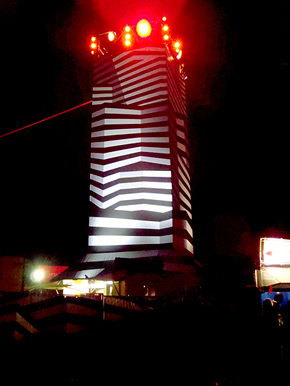 (In fact, the tower, as it is shown here, was also used for later editions of Lowlands).

On the occasion of the installation, a set of badges was printed, and distributed during the festival. Shown below a couple of these badges (diameter 2 inch each):

It was great to be involved in Lowlands. We have to admit that, when it really comes down to it, we are festival kids. True, we hate the mud, the mess, camping in general; but despite all that, our happiest teenage memories involve festivals. Seeing Nirvana, Sonic Youth and Dinosaur Jr at Pukkelpop (Hasselt), Primus and Prong at Dynamo (Eindhoven), 24-7 Spyz, Faith No More and Firehose at Poppark/Metropolis (Rotterdam)... These were glorious times.

Lowlands 2007 took place around 17, 18 and 19 August. We'd like to thank everybody at Lowlands/Mojo involved in this project: Eric van Eerdenburg, Tammo van Brakel and Martin Cramer.

Update: A technical drawing of the Dazzle Rocket was exhibited in September 2007, at the Riviera Gallery in Brooklyn, during a small group exhibition about an imaginary real estate agency (see www.rivierarealestateagency.com). Presenting the Dazzle Rocket as an actual piece of real estate, the caption we wrote for that show was as follows: "From real estate to surreal estate. Painted as a Dazzle Ship from World War I, you won't know whether this tower is going up or down. And at 250 clams a week, this silver rocket certainly won't burn a hole in your pocket. The craze of the hour, tower of power. You need this rocket. If Freudian symbolism is wrong, we don't want to be right".