Right after our graduation (in the case of Danny and Marieke, this was in 1997, while Erwin graduated a year later), we were approached by curator Leontine Coelewij, who asked us to participate in ‘Supernova’, a group exhibition that would take place at Bureau Amsterdam (SMBA), the project space of Stedelijk Museum Amsterdam. Honestly, we were flabbergasted. Our graduation project (the re-design of pop culture magazine Blvd.) was completely print-based – in fact, in our class, we were practically the only students focusing on printed matter (other students were more involved in interactive media, video, photography, etc.). And yet, based on this print-only graduation project, Leontine asked us to create an actual installation. To be invited to focus on such a spatial project, so early in our career – this meant quite a lot to us, and it was a huge opportunity. To this day, we are extremely grateful towards Leontine, for offering us this chance.

The theme of ‘Supernova’ revolved around youth- and subcultures, and the participating artists were Niels Klavers, Anuschka Blommers & Niels Schumm, Maura Biava, Hilary Lloyd and us. The exhibition ran from December 19, 1998, to January 24, 1999. More about the exhibition can be read on the SMBA website.

In 1997, we just finished working on Blvd., and we were already pigeon-holed as ‘neo-’ or ‘retro-modernists’ – labels we absolutely disliked (and still hate). Critics projected a really shallow image of modernism onto us – the notion of modernism as something fresh, clean and optimistic – almost ‘vanilla’. This was a notion we absolutely disagreed with – to us, modernism also had a darker, more critical, and more subversive side. We saw (and see) modernism as a whole universe of subversive movements, splinter-groups, opposing tendencies, esoteric cults, utopian and dystopian views, constructive and destructive forces... we definitely don’t see it as a brand of homogenous positivism – and we certainly don’t see it as a style or genre.

Thinking about these notions, of subcultures and modernism, we realized we wanted to create a sort of antidote against the cleanliness and freshness surrounding then-contemporary notions of both youth culture and modernism. That’s when we decided to come up with an installation revolving around the theme of black metal (an underground subculture, loosely related to heavy metal).

We were no strangers to black metal. In fact, coming from a hardcore/punk background, we listened to a lot of death metal and grindcore bands during our high school years (especially to Death, Morbid Angel, Obituary, Carcass, Napalm Death, Bolt Thrower, Hellbastard, Godflesh and Extreme Noise Terror); we actually saw most of these bands live, at one time or another. Also, as a young teenager, Danny actually designed t-shirts for local death metal and hardcore bands (such as Gorefest and Sjolmord). So we certainly had a certain affinity with metal-related music, and the subcultures that came with it.
In fact, in many ways, our current design practice can be traced back to those teenage years, drawing shirts for metal- and punk-bands; so it felt quite natural to re-visit this these ‘garage days’.

As we already mentioned in the first paragraph, this was the first time we had to work within the context of an art space. So the main challenge was to come up with graphic pieces that would work in a spatial way. Thinking about the theme we set ourselves (black metal), we thought it would be logical to start with creating a backdrop, defining the overall concept.

A backdrop is a flag or banner, hanging behind the band while they are performing. As such, it is the ultimate platform for band-logos. What we also liked, within the context of an art exhibition, was the fact that the format of a backdrop refers quite naturally to the idea of a painting, a canvas. In a way, a backdrop is an unstretched canvas.
Since our goal was to create a sort of ‘synthesis’ between two seemingly opposite notions (death metal and modernism), we simply used the backdrop to display the word ‘Modernism’. This wasn’t meant as an ironic statement at all – to us, it was a logical conclusion, a way to invoke the darker and more subversive dimensions of modernism.

The backdrop was a canvas banner of 2 x 3 meter (screenprinted by Shipmate, Vlaardingen), which we installed on one of the walls. The official title was ‘Backdrop Blasphemy’: 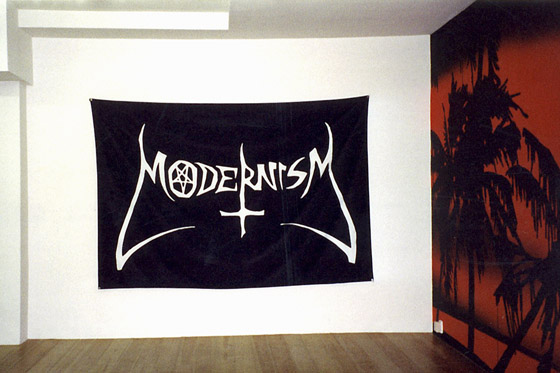 Another wall was filled with a wallpaper we designed: a large mural, printed in red and black, measuring approximately 14 x 3.5 meter. Thinking about the notion of wallpaper, we figured it would be interesting to refer to an archetypical ‘wallpaper image’ (tropical palm trees), and distort that image by introducing three black helicopters in the landscape, in a sort of ‘Apocalypse Now’ way. (Somehow, we felt these three helicopters, disrupting the peace, could almost be seen as a symbolic portrait of ourselves).

Again, within the context of an art exhibition, we think that the wallpaper referred again to quite a traditional art format: the mural. To us, it was (and still is) quite important to come up with pieces that somehow refer to (and thus reveal) the given context.

The wallpaper was produced (as long paper strips) by Blomsma Zoetermeer, and it was actually installed by an paper expert who was part of the Stedelijk Museum staff (if we remember well, the same guy was also responsible for the famous restoration of a huge Matisse painting, earlier in 1996). The actual title we gave to the mural was ‘Death from Above in the Hours of Chaos’:

A third wall was used to display a triptych, a series of three panels. Each panel consisted of 144 plastic CD-cases (‘jewel cases’), mounted to the wall in a 9x16 grid. Together, these CD-cases carried three photos of our faces, made-up in ‘corpse paint’ (a specific style of make-up, used by black metal bands). The act of painting our faces was certainly meant as a gesture of identification, as a way of showing our alliance with the subcultural.
At the same time, the notion of the triptych, and the theme of a group portrait, were (again) ways to refer to the given context, to underline the given conditions of the art space.

All the CD-booklets (that we used to fill the 432 CD-cases) were printed out by ourselves. The title we gave to the triptych was ‘Death Metal Militia’: 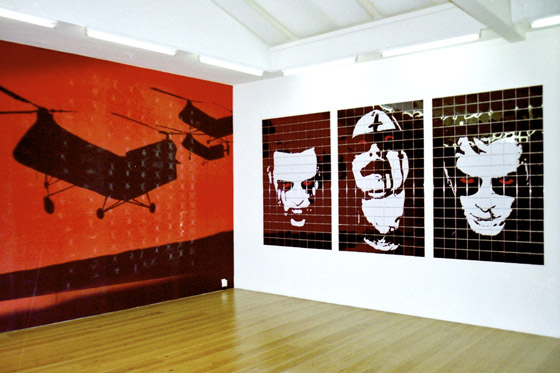 We also felt the need to experiment with moving image, so we turned an early sketch into a little animation movie. Titled ‘Creepy Crawly’, the piece consisted of three small TV-screens, showing a drawn spider walking from one screen to the other, in a continuos loop. (Again, the three screens could also be seen as a symbolic group portrait, echoing the three helicopters, and the three faces). 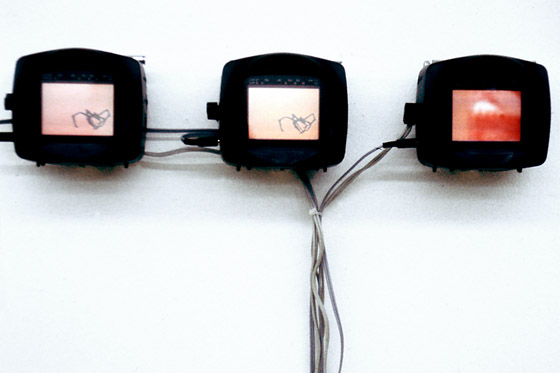 For the exhibition, we also produced some printed matter. First of all, we created a series of three A6-sized postcards, which served different purposes: part of these cards functioned as actual invitations, while the other part were used as labels (‘hang tags’) for the t-shirts we created for the exhibition (more about those shirts later).

Shown below the front of the three cards, featuring drawings of a palm tree, a spider, and a couple of pentagrams. If we remember well, these cards were offset-printed by De Appelbloesem Pers: 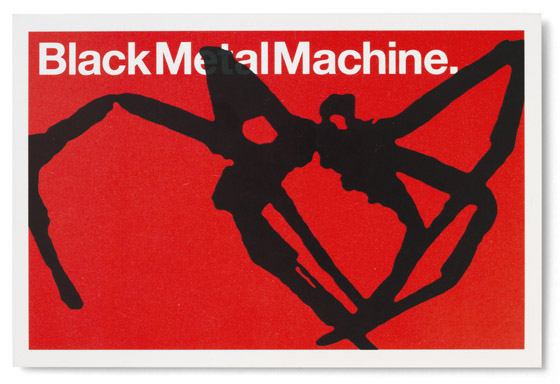 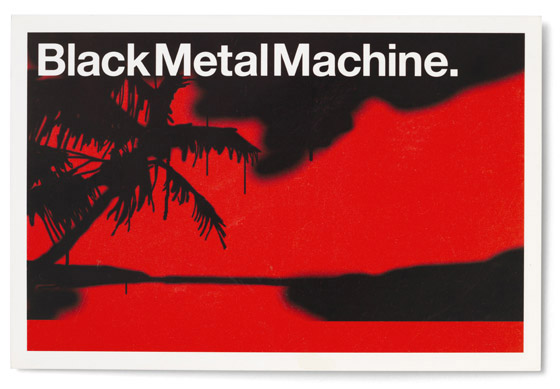 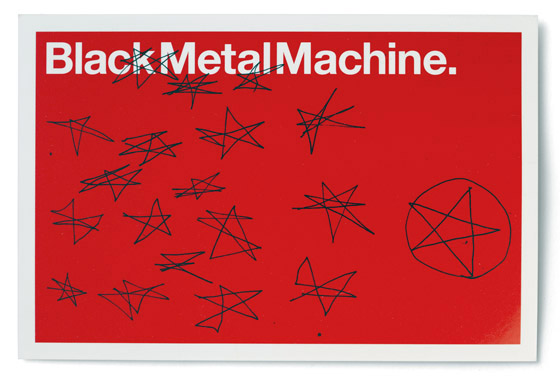 We also designed a t-shirt, which was sold (as a ‘multiple’, in a limited edition of 75) at Bureau Amsterdam, during the exhibition (as ‘rock merchandise’, so to speak). The t-shirt itself featured the picture of our three faces, printed in black and white (screenprinted by Studio HS, if memory serves well). The multiple also included a (signed and numbered) postcard, and an audio-CD.

A year later (in 1999), we re-released this shirt via the Japanese label 2K/Gingham (who also released a shirt featuring the ‘Modernism’ logo, as shown on the backdrop). The original shirt (the one that was sold during the exhibition) was printed on a Fruit of the Loom ‘Screen Stars’ shirt: 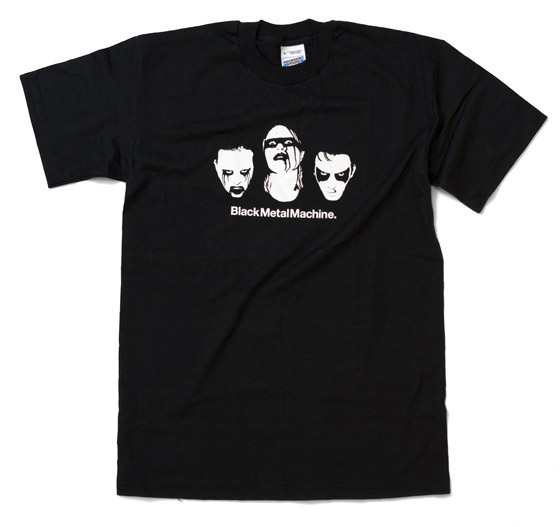 As part of the multiple, we also created an audio-CD, containing a single noise/drone track. We packaged this CD in a cardboard sleeve, featuring again our three faces. This sleeve was again printed by De Appelbloesem Pers (and manually folded and glued by ourselves). Shown below the front and back of this CD-sleeve, in its unfolded form: 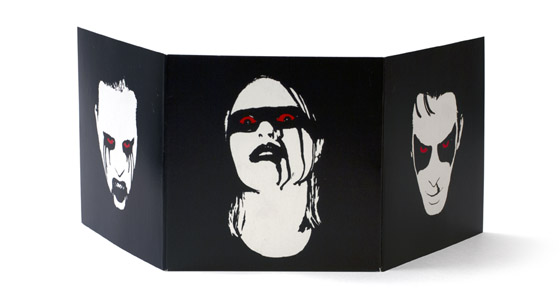 And that wraps up the story.

Later, a couple of early sketches we made for Black Metal Machine appeared in some other places, for example in art magazines like Paleo-Psych-Pop (1999), Rose Tatouees (2003) and Tubelight (2003). In 2001, we also made a couple of spreads featuring some early BMM sketches, for inclusion in an art publication called Hard Pop (but for some reason these spreads were never published). Issue 287 (July 2001) of Japanese magazine IDEA also features some material related to Black Metal Machine.

A full story (written by Leontine Coelewij) about ‘Supernova’, including more information about ‘Black Metal Machine’, can be found in issue 42 of the SMBA bulletin (published in december 1998). This bulletin was later reprinted (in full) as part of ‘Ten Years SMBA: We Show Art’ (Artimo, 2003).

We’d like to thank Leontine Coelewij, for playing such a significant part in the beginning of our career (if you can call it a career). Furthermore, we’d like to thank the technical staff of SMBA, and all other people involved.

next: World of Money