In the middle of 2003, Tokyo art space Rocket Gallery approached us to contribute to 'Jungle LP Show', a group exhibition of record sleeves. Taka Kawachi, the curator of the show, had asked the involved artists and designers to create work inspired by existing record covers. In other words, the work had to be a homage or tribute to an already existing record sleeve.

Our contribution to this show was a series ('triptych') of three empty cardboard gatefold record sleeves, based on the classic record cover of Pink Floyd's 'The Dark Side of the Moon' (originally designed in 1973 by the brilliant UK design studio Hipgnosis). We took the already existing sleeve, which shows a pyramid-shaped prism, and added two other sleeves. By adding these new sleeves, the original Pink Floyd sleeve suddenly becomes part of a geometric sequence of triangle, circle and square.
The use of this sequence (of triangle, circle and square) is a reference to Bauhaus (the pre-war German design school, not the post-punk British goth band). The combination of triangle, square and circle played a big role in Bauhaus ideology (for example, Johannes Itten saw "the circle as signifying movement, the square as tranquillity, and the triangle as indicating a strong contrast of direction"), and the sequence of a yellow triangle, a red square and a blue circle can be seen almost as a trademark for Bauhaus.

In other words, the 'Dark Side of Bauhaus' series is a double-homage, a work that refers both to Hipgnosis and to Bauhaus. In a way, it's also an attempt to synthesize two of our main influences: psychedelic pop and early modernism. (In that sense, it's quite similar to the Zang! Tumb Tumb poster that we designed in that same year, which was another attempt to bring together two opposite strands of modernism).

Shown below are the three gatefold sleeves. From left to right: square, triangle, circle. (Size: 12 inch each. Material: paper, cardboard, ink, glue, plastic. Printed in an edition of one). 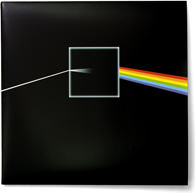 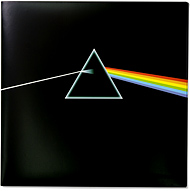 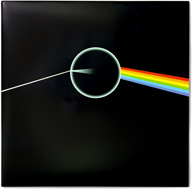 Below some more shots and details, showing the out- and inside of one of the gatefold sleeves: 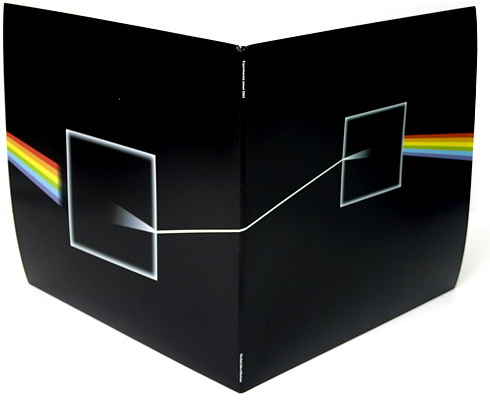