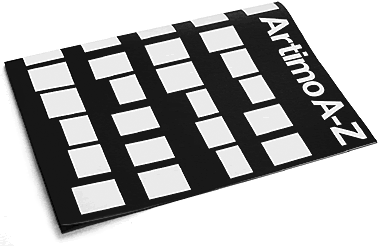 Artimo A-Z was an art book publisher (and at one time also bookshop) based in Amsterdam. Shown below is a poster (front and back) we designed for them in 2003, basically a two-sided A2-sized promotional poster, printed in black & white.

On the back of this poster, all Artimo's publications were displayed; on the frontside, the silhouettes of these publications were shown, as white boxes on a black background. Because the paper used for this poster was quite thin, almost transparent, the front and back of this poster complement each other when held against the light. Half of these posters were folded to A4 booklets (see above), the other half were kept unfolded, as A2 posters: 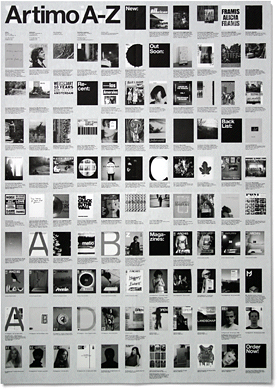 Around the time we designed this poster, Artimo A-Z were still called Artimo. We only added the 'A-Z' on the poster because of purely formal reasons: we wanted to underline the fact that the poster was a list.
The people behind Artimo liked the addition 'A-Z' so much, that when they started a bookstore, they decided to name their bookstore Artimo A-Z.

In the beginning of 2004, Artimo asked us if we wanted to design the whole graphic identity (for both the publishing house and the book store), based on the simple poster that we designed in 2003.

The whole graphic identity was based on the pattern of silhouettes as used on the A2 poster. Every piece of stationery featured another detail of the pattern: 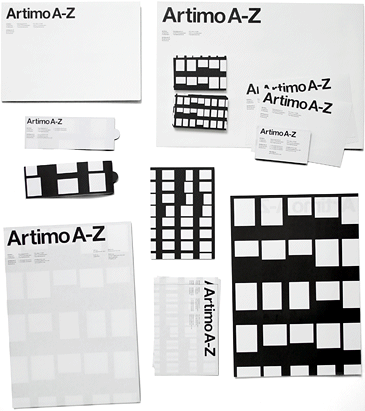 The bookmark (shown below) was an item we were particularly glad with. It's basically a thin paper strip (300 mm x 55 mm), folded in two (so that it becomes a strip of 150 x 55 mm). It features a punched-out hole, that allows a round tab to stick out, and a perforation, that makes it possible to tear off a price tag.
For the design of this bookmarker we were quite inspired by the folded pieces of paper we would sometimes find in Japanese publications (such as the books published by Little More). It's apparently a Japanese way of labelling books. 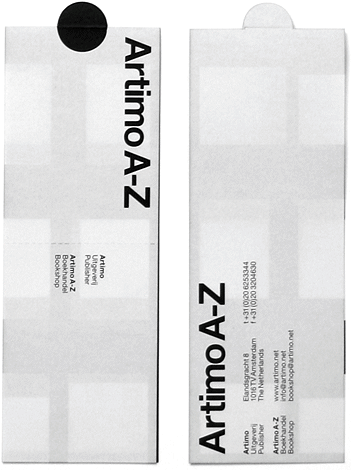 Another thing we were quite glad with was the sign that we designed for the exterior of the bookshop: a simple, square light box. 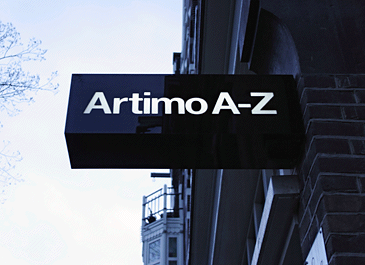 The interior of the bookshop, designed by architect Herman Verkerk, was actually also based on the design of the original A2 poster. It's quite surreal that a poster we designed in a few hours became the basis of a name change, a graphic identity, and a complete shop interior.

Finally, shown below, a simple plastic bag we designed, as part of the overall Artimo graphic identity. Approximately 35 x 50 cm, black ink on white plastic, 'A' on one side, 'Z' on the other: 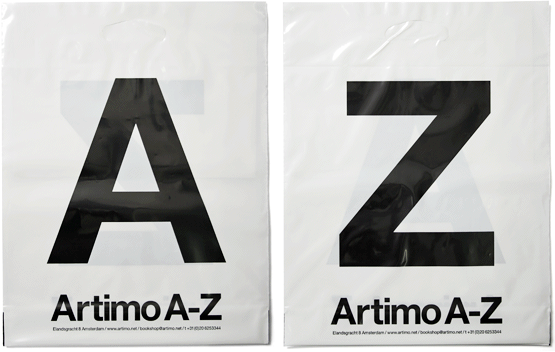