The first shirt we designed in 2003 was 'Paperclip Amy' (Shown below). We stumbled upon a typeface consisting of paperclips ('Clipboard', released through Fontbank) and we couldn't resist using it. After all, a paperclip is such an iconic piece of design; to refer to that, is basically to refer to modern culture in general.
(One of the more interesting things about the paperclip is the suggestion, encapsulated in the object, that order is not a fixed concept. Whereas a staple suggest a fixed order, a paperclip holds a stack of paper as if the front page might as well be the last page. True, a paperclip does dictate a certain order, but at the same time reveals the relativity of that order. Another thing we find interesting about the paperclip is its spiralling aesthetic. Spirals often refer to eternity, as a spiralling movement can always be extended, either inwards or outwards. But maybe we're drifting off now).
For the shirt, we decided to combine the word 'Paperclip' with the word 'Army'; we liked the way these two words worked together. Pragmatic and militant at the same time. We are really interested in juxtapositions like this; phrases such as 'radical mediocrity', 'pragmatic subversion', etc.
The shirt was designed in 2003, and released in 2004, in two different versions: white on black, and white on blue. Shown here is the white on black version: 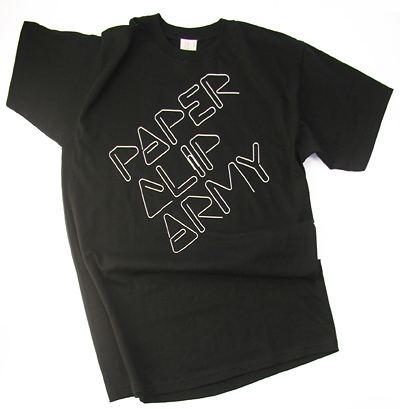 The 'Dark Side of Bauhaus' shirt (shown below) is basically an adaption of a project we did earlier that year, a project for Rocket Gallery (Tokyo). For a group exhibition, we were asked to design a work based on an already existing record sleeve (as a tribute, or homage). We decided to create a piece referring to Pink Floyd's 'Dark Side of the Moon' sleeve (originally designed in 1973 by Hipgnosis). We added to this sleeve two other sleeves, creating a triangle-square-circle sequence, referring to the Bauhaus movement. Read the full story about this project here.
For the shirt, we put the triangle-square-circle sequence on the front, in a vertical row. On the back, we simply put the title of the project (set in ITC Bauhaus, obviously).
The shirt was designed in 2003, and released in 2004, in one version: white, red, orange, yellow, green, blue and purple ink, on a black shirt. Shown here are the front and back of the shirt: 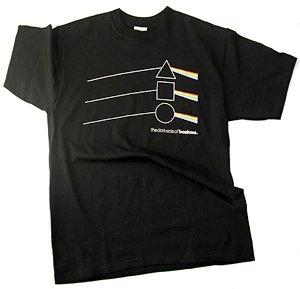 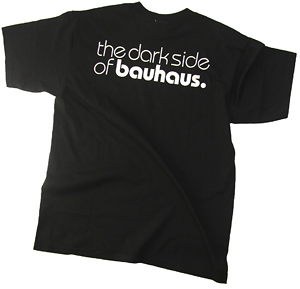 Some of our previous t-shirt designs dealt with 'abstracted' slogans: the 'John & Paul & Ringo & George' shirt (2001) was basically an abstracted band shirt, while the 'Anti' shirt (2000) was an abstracted protest shirt.
With the next two t-shirts, we tried something else; instead of an abstracted slogan, we were experimenting with the idea of an 'annotated' slogan. In other words, a slogan that wasn't negated through abstraction, but through an added comment. 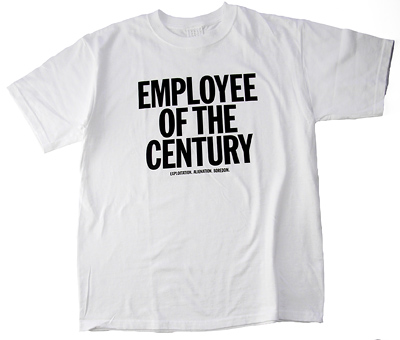 Shown below is another shirt in which we tried to explore the idea of the 'annotated slogan' (see the previous paragraph). The slogan "Business in the front / Party in the back" is an American saying, used to describe a certain hairstyle: the so-called 'mullet' (a haircut that's short on top, and long in the neck).
We thought this slogan perfectly symbolized the alienation caused by present-day society, a society where 'business' is separated from 'party', 'work' is separated from 'play', and 'labour' is separated from 'leisure'.
So we decided to 'annotate' the slogan, using two comments referring to the problematic nature of this separation. The small type on the front says "Polarization is Schizophrenia", while on the back, it says "Separation is Doom" (which is actually a quote from the liner-notes of the first MC5 album).
The shirt was designed in 2003, and released in 2004, in one version: blue on white. Shown here are the front and back of the shirt: 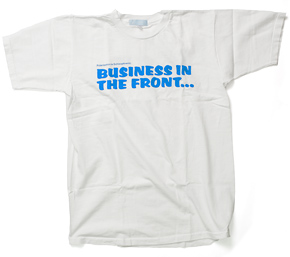 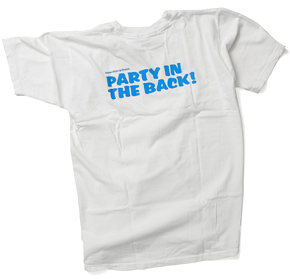 All these items used to be available through 2K/Gingham. However, when in 2008 Yoshi Kawasaki decided to leave the company (following a change in management), we decided to leave with him, and withdrew our shirts from 2K. In other words, these shirts are currently unavailable. However, if everything goes according to plan, a selection of these shirts will be reprinted and released through Yoshi Kawasaki's new label, Publik / Five Leaves Inc., in 2009. We'll keep you updated.