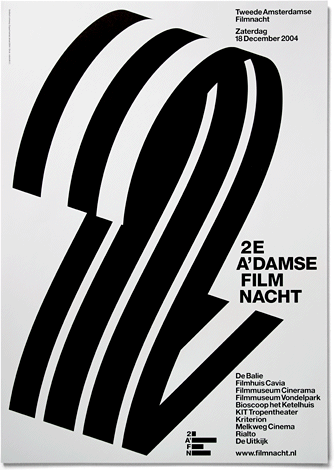 In 2003, we designed quite an extensive (and expensive) package of printed matter for the First Amsterdam Film Night (1AFN), including six different A2 posters (see 1AFN) . A year later, we were asked to design all the material for the same event, now named Second Amsterdam Film Night (2AFN). The only difference was that there was considerably less budget than the year before, and considerably less time. In other words, the material we designed for 2AFN was in many ways a slimmed-down, streamlined version of the stuff we did for 1AFN.

We based all the items we designed for 2AFN on the logo that we designed for 1AFN a year earlier. This logo showed the acronym '1AFN' in combination with four abstract black bars, referring to strips of film. For 2AFN, we took these abstracted strips of film, and turned them into a large numeral 2. Or actually, we turned them into two different variations of the numeral 2.

At the top of this colomn, we show the A2-sized poster, featuring one variation of the numeral 2. The other variation was used on the inside of the program booklet, which doubled as a second A2-sized poster. (We haven't photographed this second poster yet).

Both variations (of the numeral 2) are shown on the invitation. This invitation was basically an A5-sized card, that could be used by the participating cinemas to either send around as postcard, or distribute as flyer. In the middle of the card is a perforation, so that the A5 card could also be used as two separate A6 cards. Shown below the front and back of the A5-sized card: 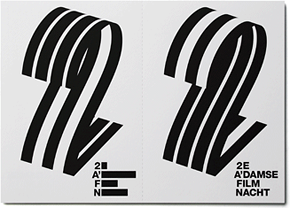 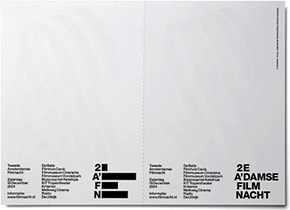 Shown below the program of the 2AFN festival, listing all the times, movies, addresses, etc. Basically a double-sided, A2-sized sheet, folded to an A4-sized booklet. One side shows all necessary information.
The other side (which, as we already wrote, we haven't photographed yet, so it's not shown here) is a poster quite similar to the A2 outdoor poster, showing the 'other variation' of the numeral 2.
First of all, here's the frontside of the A4-sized brochure: 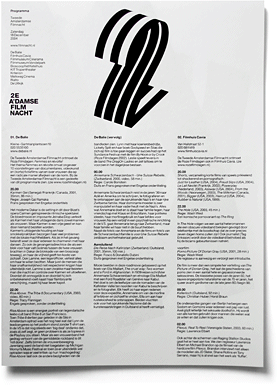 Shown below, in one row, the front, inside spread and back of the booklet: 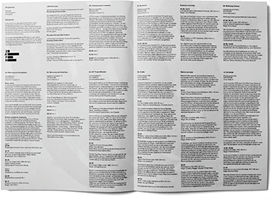 This booklet then unfolds in an A2-sized poster; not shown here.

We also designed a t-shirt for the 2AFN festival; it was printed white, on a black Fruit of the Loom t-shirt. We actually printed a few of these shirts with phosphor ink, giving the shirts a glow-in-the-dark-effect, referring to the idea of night, cinema, dark, light, etc. Shown below the shirt in daylight, and next to it the shirt at night: 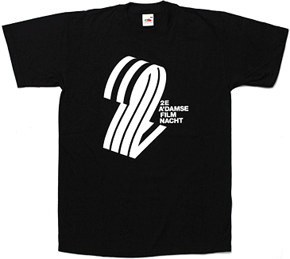 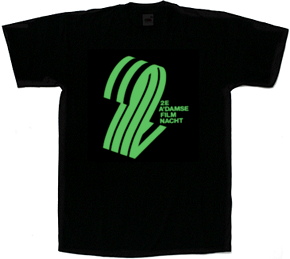 Shown below a compact mini site we designed for 2AFN. Basically a streamlined version of the 1AFN site, it featured a shifting black & white background, draggable boxes, and links to all the participating cinemas. The 2AFN program could be checked online, or downloaded as a PDF.

Thanks to Dirk van der Straaten and the rest of the Kriterion crew.

next: Under a Tenner